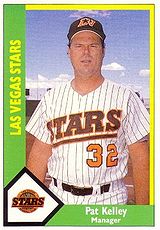 Pat Kelly played three games for the Toronto Blue Jays in 1980, going 2 for 7 and striking out twice. He then went on to a long career as a minor league manager.

Kelly was a coach for the GCL White Sox (1984) and Glens Falls White Sox (1985). Later, he was a scout for the Toronto Blue Jays (2001-2002) and Atlanta Braves (2006). In 2007, Kelly became the director of Florida on-field operations for the Cincinnati Reds. On July 3rd, he was named the team's bench coach following the departure of Bucky Dent, two days after the firing of manager Jerry Narron.

Kelly's brother, Mike Kelly, was an outfielder in the Toronto Blue Jays chain. His son, Casey Kelly, was drafted in the 1st round of the 2008 amateur draft by the Boston Red Sox and made his major league debut with the San Diego Padres in 2012.

In the winter of 2016-17, he was the manager of the Tigres del Licey in the Venezuelan League, but the stint ended in ignominy when on January 5, 2017, he came to the mound in the 8th inning to replace P Rafael Soriano without having checked that a reliever was warmed up. He was forced to replace Soriano with a cold Leyson Septimo, who went on to cough up the lead and lose the game against arch-rivals Águilas del Zulia in a key game. He was fired the next day.