The city of Louisville has had a long association with professional baseball. The Louisville Grays were original members of the National League in 1876 and 1877. From 1882 to 1891, the city had a team in the then-major league American Association, known first as the Louisville Eclipse (1882-1884), then as the Louisville Colonels (1885-1891), which became the standard name for teams from the city. When the American Association folded after the 1891 season, the Colonels moved to the National League. When the National League decided to contract from 12 to 8 teams after the 1899 season, Louisville was one of the franchises destined for the cutting block. However its owner, Barney Dreyfuss, also owned a stake in the Pittsburgh franchise, and managed to transfer many of Louisville's best players, including future Hall of Famers Honus Wagner and Fred Clarke, to Pittsburgh, instantly making that team one of the powerhouses of the first decade of the twentieth century. (For a more detailed history on the Louisville Colonels go here: 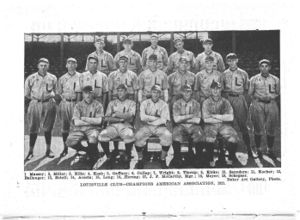 When the American Association re-formed as a minor league in 1902, the Colonels were charter members and remained part of the league until it folded in 1962. While a number of franchises moved either to the Pacific Coast League or the International League, the Colonels simply disappeared, until they were revived in 1968 as members of the International League. The team folded again in 1972. More recent minor league teams in Louisville have used different names, including Redbirds, RiverBats and Bats.