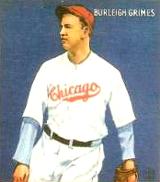 Inducted into Hall of Fame in 1964

"Never mind . . . Grimes will dust me off this afternoon." - Gabby Hartnett to a Pullman porter at the train station who was about to brush him off, about facing Burleigh Grimes later that day (according to Grimes himself in Baseball Digest, May 1960)

Burleigh Grimes, with 270 major league victories, was the last legal spitball pitcher. When the pitch was banned in 1920, several players were allowed to continue throwing the pitch until their retirement. Of those, Grimes was the last to play in the major leagues.

His nickname comes from his habit of not shaving on days when he pitched. He chewed slippery elm when pitching to improve the lubricating properties of his saliva, and the stubble helped to protect his face from the irritating effects of the slippery elm.

Grimes was already a successful pitcher before the spitball was banned (for instance, he went 19-9 in 1918), but some of his best years came after 1920. He learned the spitball when watching Hank Gehring pitch for the St. Paul Apostles as a youth in 1906 and imitating him.

He was an excellent athlete when young, and actually made his first professional appearance at shortstop for the Eau Claire Commissioners of the Minnesota-Wisconsin League in 1912. He was also used many times as an outfielder that first season, in addition to pitching. The league was very precarious and folded on July 2, with Grimes finishing the season by pitching with an amateur team based in Austin, MN.

Grimes hit .316 in World Series play, including going 4-for-12 against Lefty Grove and George Earnshaw in the World Series games he pitched against them. He finished his major league career with a solid .248 batting average, showing that he never lost the skills as an all-around player.

"I know we dealt away a fine young pitcher, but that Grimes just fights with everyone, friend or foe." - Barney Dreyfuss, Pirates owner, 1918

Grimes and Frankie Frisch had a long feud while they were players, with Grimes sometimes knocking him down with pitches and Frisch once spiking Grimes seriously when Grimes covered first base. They later became friends and Frisch got him a job managing in Toronto, according to Grimes.

After his playing career ended, Grimes was manager of the Brooklyn Dodgers in 1937 and 1938 and a Kansas City Athletics coach in 1955.

Grimes also scouted for the New York Yankees, Kansas City A's, and Baltimore Orioles (until 1971). He was scouting for the Yankees in 1948 when he led the Independence Yankees on an interim basis.

In later life he had a farm in Missouri.

One source: May 1960 article in Baseball Digest about Grimes.