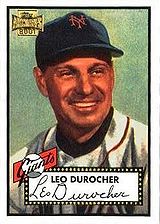 Inducted into Hall of Fame in 1994

"What are we at the park for except to win? I'd trip my mother. I'd help her up, brush her off, tell her I'm sorry. But mother don't make it to third." - Leo Durocher

"I do not care if the guy is yellow or black, or if he has stripes like a zebra. I'm the manager of this team, and I say he plays. What's more, I say he can make us all rich. And if any of you cannot use the money, I will see that you are traded." - Leo Durocher, settling the issue of Dodger players refusing to associate with Jackie Robinson in 1947 [1]

Leo "The Lip" Durocher was a big name in baseball for decades, and was named to the Hall of Fame in 1994 after his death.

Durocher grew up in a French-speaking family in Massachusetts. He wasn't one for school, preferring to frequent local pool halls as a teenager but also building a reputation as a formidable semi-pro baseball player in spite of his smallish size. Local companies would offer him to cushy jobs just so he could play on their baseball teams. In 1925, he signed with the New York Yankees, who assigned him to the Hartford Senators of the Eastern League. A weak-hitting shortstop, Durocher broke into the major leagues at the age of 19 for two games at the end of that season. He returned to the minors with the Atlanta Crackers in 1926 and the St. Paul Saints in 1927 before making the Yankees' roster for good in 1928.

He played two full seasons with the Yankees of Babe Ruth and Lou Gehrig, appearing in the 1928 World Series. After some time with the Cincinnati Reds, he became part of the famous Gas House Gang with the St. Louis Cardinals in the mid 1930s, reaching the World Series again in 1934. He finished his career playing several seasons with the Brooklyn Dodgers, and started his long managerial career while still a player in 1939. During his playing days, Durocher made the All-Star team three times. He was the first Dodgers player to ever get a hit in an All-Star Game.

"Give me some scratching, diving, hungry ballplayers who come to kill you." - Leo Durocher

He was a very controversial figure, often described as "brash" and "abrasive". Although a light-hitting shortstop, he had an image as a tough guy. He was rumored at one point to hang out with gangsters, and was suspended in 1947 for associating with gamblers. That year, the Dodgers won the pennant with mild-mannered Burt Shotton at the helm. However, he had time to make sure Jackie Robinson would make the team before being handed his suspension, a move that was probably as instrumental as any in leading to that pennant.

His autobiography is called Nice Guys Finish Last after a comment (paraphrased) he once made about Mel Ott as a manager. The true quote, however, wasn't as snappy. He originally said of the rival New York Giants: "The nice guys are all over there. In seventh place."

As a young ballplayer, Leo's roommate with the Yankees, Babe Ruth, nicknamed him "the All-American Out." Elden Auker, in his book Sleeper Cars and Flannel Uniforms, tells the story of how young Durocher stole money from the Babe, earning a bad reputation that long remained within baseball circles only.

A story which may not be true, but one certainly may hope is: "Leo the Lip" didn't get along with umpires, and one umpire in particular he had problems with. One day, that ump had first base, and there was a close play there, when a player on Durocher's team tried to slide into the bag, and ended up bowling the umpire over. Dazed for a little bit, he was unable to make a call right away. As he started coming out of his fog, the first thing he heard was an old familiar voice saying "Well, was he safe or was he out?" Without hesitating he replied, "If that's you, Leo, he was out!"

He had four wives, and was married to actress Laraine Day [1] from 1947 to 1960. Day knew nothing about baseball when she met Durocher, but became a very devoted baseball fan. Durocher was friendly with the likes of Frank Sinatra and Dean Martin, and enjoyed his Hollywood connections. He once played himself on The Munsters, a 1960s TV comedy about a ghoulish family living in suburbia. He is there to scout Herman Munster for the Los Angeles Dodgers. At seven feet and six inches tall and 380 pounds, Munster hit shots that dwarfed the best efforts of Babe Ruth. Actor Fred Gwynne played the lovable, if child-like, version of Frankenstein's monster. Ultimately, Herman stuck with his more fitting job at a cemetery.

"Stick it in his ear!" was another well-known Durocher battle cry.

There is a popular story (first written by John Holway in 1954) that during a 1953 New York Giants-Japan tour, Durocher, assuming the Japanese couldn't speak English, screamed from the third base coaching box for the runner at first to steal. However, the catcher Jun Hirota, who was a Japanese-American, spoke fluent English and gunned the runner by 20 feet. This story has been debunked and Durocher had spoken to Hirota prior to the game. In fact, Leo wound up teaching Hirota how to better hide his signals.

He was a TV commentator in the 1950s between managerial assignments.