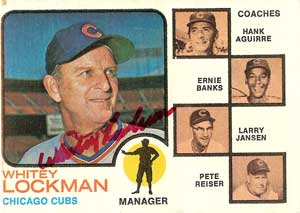 Signed by scout Bill Pierre of the New York Giants as an amateur free agent in 1943 at age 16, he played for Springfield in the Eastern League in 1943 and the Jersey City Giants in the International League from 1943 to 1945, then, at 18 years of age, he broke into the big leagues on July 5, 1945, with New York. He then entered the merchant marine, where he served until 1947, after which he returned to the Giants, only to miss almost the whole year when he broke his ankle in an exhibition game.

Lockman homered in his first major league at-bat, on July 5, 1945, and once led off consecutive games with home runs, but he was never a feared power hitter. He batted .341 in limited duty in his first season. He hit a career-high 18 homers in 1948, his first full season, and had his only other .300 season in 1949. He was a regular in the Giants' lineup from 1948 through June of 1956, when he was traded to the Cardinals. His exile was brief, however, as the Redbirds sent him back to the Giants after the end of the season.

He was a member of the Giants' last New York team, and their first San Francisco outfit, when the club moved West in 1958. Appearing in 1,666 games, Lockman had a .279 career batting average with 114 home runs and 563 RBI. In the 1951 World Series, won in six games by the New York Yankees, Lockman hit .240 with a home run. Three years later, he batted only .111 in the 1954 Fall Classic, but the Giants swept the Cleveland Indians to win the world championship.

Playing for the pennant-winning 1951 and 1954 Giants, he usually batted leadoff. He was a consistent contributor and one of the hardest men to double up in major league history, hitting into a double play only once every 87 at-bats. In the three-game playoff with the Brooklyn Dodgers in 1951, his 9th-inning double drove Don Newcombe from the game and set the stage for Bobby Thomson's famous home run off Ralph Branca. (FK) From 1945 to 1955, Lockman was a workhorse for the Giants, making over 600 official plate appearance seven times. An outstanding contact hitter, he struck out only 19 times in 502 official plate appearances in 1957.

Lockman's coaching career began immediately after his playing days ended, as he joined the Reds' staff in 1960 under skipper Fred Hutchinson. In 1961, when his old mate, Alvin Dark, became manager of the Giants, Lockman became his third base coach, serving through 1964. Lockman then joined the Chicago Cubs as a minor league manager, coach and Director of Player Development. In July 1972, he succeeded his old mentor, Leo Durocher, as Cubs' manager and the revitalized Cubbies won 39 of 65 games to improve two places in the standings.

Lockman managed the Cubs with owner Phil Wrigley hellbent on dismantling the team. Nonetheless Lockman brought on young talent such as Burt Hooton, Rick Reuschel and Bill Madlock and kept the team in contention. But losing marks in 1973 and into 1974 cost Lockman his job; he was relieved of his duties on July 24, 1974 and moved back into the Chicago front office. He finished with a career major league managing record of 157-162 (.492).

He retired after the 2001 season, rounding out a 59-year baseball career. He had blond hair and blue eyes, his ancestry was German and his principal hobby was golf.