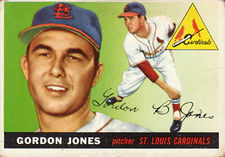 Gordon Jones served in the Korean War. He pitched eight years for the St. Louis Cardinals (1954-1956), New York Giants and San Francisco Giants (1957-1959), Baltimore Orioles (1960-1961), Kansas City Athletics (1962) and Houston Colt .45s and Houston Astros (1964-1965) and 12 years in the minor leagues (1949-1965), losing three seasons to the military. He was signed out of high school in Sacramento, CA by Ken Penner of the St. Louis Cardinals as an amateur free agent in 1949. His minor league career was interrupted when he served in the U. S. Armed Forces in the Korean War (1951-1953) (BR). He coached the Houston Astros for a couple of years (1966-1967) and then was a sales representative for a wholesale electrical dealer. He died from a heart attack at age 64 but suffered from diabetes before that and is buried at East Lawn Sierra Memorial Park in Sacramento.

Born April 2, 1930, he passed away on April 25, 1994. Although born in Portland, OR, he was raised in Sacramento. Gordon’s physical talents and love of baseball carried him all the way to the major leagues. He spent 11 years in the majors – a long run for a pitcher. Though cut short too soon, Gordon had a full and rich life filled with many friends and much good fortune. As he once said when reflecting on his youth: "I had the world by the tail with a down-hill drag".

His first big league team was the St. Louis Cardinals in 1954. From there, he joined the New York Giants in 1957, and remained with the team when they moved to San Francisco in 1958. Over the next few years he played for Baltimore and Kansas City, finally winding up with the Houston Colt .45s in 1963. He was mainly a relief pitcher, but did not accumulate many decisions over his career: only once did he have as many as 10, with the Athletics in 1962, when he was 3-2 with 6 saves. His career high for innings was 81, in his rookie season, when he made 10 starts, and the most games he pitched was 34, with the Colt .45s in 1964.

He married his Sacramento High School sweetheart, Helen Hull, on August 24, 1952. During their marriage, he and Helen conceived three children: Gary, Janet and Gregory, all three of whom still live within a hundred miles of Sacramento. His first marriage to Helen ended in divorce; however, all parties remained friendly, and Helen still proudly displays pictures and other memorabilia from Gordon's big league years in her Town & Country art gallery – aptly named Helen Jones Gallery.

Not long after retiring from professional baseball and returning to Sacramento, Gordon met Patricia Wacula, a fiery schoolteacher at Sam Brannon middle school in South Sacramento, CA. Gordon and Pat were married in the Roseville backyard of close friends Don and Barbara McCullough in the summer of 1972. Gordon and Pat could often be found hanging out with their many good friends at the Ironsides Bar & Grill in midtown Sacramento. Gordon was hospitalized in Lodi, CA after collapsing during a round of golf. Gordon’s unexpected death occurred after a short hospital stay. The cause of death was heart failure due to complications arising from diabetes. He was just 64 years old.