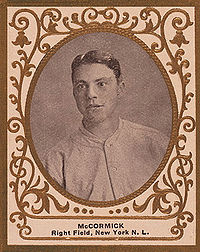 Photo while at Bucknell

Moose McCormick attended Bucknell University and was a teammate there of Christy Mathewson. After he hit .500 as a senior, he was signed by the Jersey City Skeeters. In 1903 he hit .362, leading the Eastern League in batting.

The New York Giants purchased him and he made the majors in 1904, but he made the mistake of telling John McGraw that he wasn't planning to make the major leagues his career. He was sold to Pittsburgh in mid-season. After the season, since he had earned an engineering degree at Bucknell, he went to work in the steel industry.

He came back to baseball in 1908 and eventually played for McGraw again. After baseball, he went back into the steel business, but also served in World War I. He later coached baseball at Bucknell University (1923-1925) and at the United States Military Academy (1926-1936), and served in World War II as director of physical education at Mitchell Air Base.

In 1908, he was part of the Merkle Bonehead Play, one of baseball's most famous incidents.