Hooks Wiltse pitched a dozen seasons in the majors, mostly for the New York Giants under manager John McGraw in the dead-ball era. He won 139 games and appeared the World Series in two different years.

The brother of major leaguer Snake Wiltse and Arthur Wiltse, who also played ball, Wiltse was born in Hamilton, New York, and played local ball before joining the Troy Trojans in the New York State League in 1902. In 1903, he won 21 games for Troy, and the next summer, 1904, he made his major league debut with the Giants. He was immediately successful at the major league level, going 13-3 in his first year while setting a major league record by winning his first 12 major league decisions, a record that Wiltse still shares with Butch Metzger. Wiltse's streak was from May 29th to September 15th. 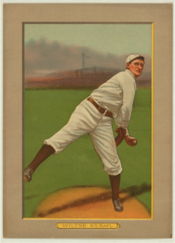 Wiltse hurled a no-hitter against the Philadelphia Phillies on July 4, 1908, striking out 6 during 10 innings of work. He went on to record a career-high 23 wins that year and notched 20 victories in 1909. He went on to pitch in two games during the 1911 World Series. He did not appear on the mound during the 1913 Series, but played in two games as a first baseman after injuries to Fred Snodgrass and Fred Merkle.

Wiltse closed out his major league career playing for the Brooklyn Tip-Tops in the Federal League in 1915.

After his major league days, Wiltse continued as a minor league player-manager for another decade, with much of that time spent with the Buffalo Bisons. Wiltse was a part owner of the Reading Pretzels in 1917, and apparently lost much of his money on the venture. He was said to be done with baseball, but returned the next year as manager of Buffalo [1]. He was a New York Yankees coach in 1925. In 1932-1933, he was an alderman in Syracuse, NY. In 1952, he was elected to the International League Hall of Fame. Wiltse died at the age of 79 in Long Beach, New York, on Long Island.