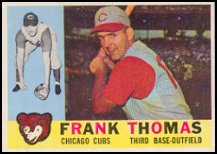 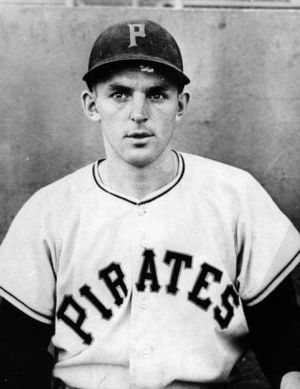 Playing in the Minors with the Tallahassee Pirates

Despite a distant leftfield fence in Pittsburgh, Frank Thomas became a proven slugger and three-time All-Star who hit 286 home runs in his career, including over 20 in ten of his sixteen major league seasons. People nowadays tend to call him "The original Frank Thomas" or "The white Frank Thomas" to distinguish him from the player of the same name who came up in the 1990s and went on to a Hall of Fame career.

His best season was 1958 when he was second in the National League in home runs, and fourth in the MVP voting. Ironically, his next best season was with the fledgling and inept New York Mets in 1962, when he hit 34 homers with 95 RBI.

Thomas played on two of the worst teams in major league history. He had 21 at bats while playing in the outfield for the 1952 Pittsburgh Pirates, which finished 42-112. Thomas spent eight seasons in Pittsburgh, losing over 100 games three times. In 1959, one season removed from Thomas's first on a winning team, he was traded to the Cincinnati Reds. After stints with the Chicago Cubs and Milwaukee Braves, Thomas was traded to the New York Mets before their inaugural 1962 season. He played outfield, third base and first base for the Mets, who finished 40-120 - the worst won/loss mark of the 20th century.

He was nicknamed "The Big Donkey" by fellow players, in part for his less-than-stellar people skills, though it should be noted that he studied for the priesthood in the early 1940s.

According to Bill James's win shares, he was the worst fielding third baseman ever - at least among those among the top 300 in innings played at the position. In 1965, he got in a fight with teammate Dick Allen before a game and was sold to the Houston Astros the next day for his actions in starting the fight. This would be the first of many controversies centering around Allen.

According to the similarity scores method, the most similar player to Thomas - as a hitter - was Bobby Thomson.

Thomas made last putout at the Polo Grounds when it was the venue for the New York Giants, on September 29, 1957.