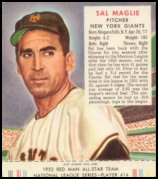 Sal Maglie made his major league debut in 1945 with the New York Giants at the "old" age of 28. After that season, he jumped to the Mexican League. He spent two years for Puebla of the Mexican League, and won 20 games both years. All of the players who jumped to Mexico were suspended indefinitely by Commissioner Happy Chandler and Maglie would not appear in another major league game until 1950 at age 33, and he soon became a bona fide star.

When Maglie returned, he began the season in the bullpen before moving into the starting rotation. Maglie was 18-4 while racking up 206 innings for the Giants. He also led the National League in ERA.

Maglie gained his interesting nickname, 'The Barber', because he would throw the ball around batters' chins who were crowding the plate. He was quoted as saying, "When I'm pitching, the plate is mine."

The following season, 1951, Maglie was named to the All-Star team en route to leading the NL in wins. He also made a World Series start as the Giants won the pennant on Bobby Thomson's famous home run.

Maglie was an All-Star again in 1952, but his numbers began to slide. Because of the War and his suspension, Maglie was only in his third full season at age 35. He continued to pitch for the Giants through the 1954 season.

From 1955 to 1958, Maglie made it a habit of being traded to the other league at mid-season. He was dealt to the other league four times, a major league record. He played for the Cleveland Indians, Brooklyn Dodgers, New York Yankees, and St. Louis Cardinals. He pitched a no-hitter for Brooklyn in 1956 (at age 38) and retired with a very impressive 3.15 career ERA and a very high winning percentage of nearly 66 percent.

While pitching for the Dodgers in the 1956 World Series, Maglie was the losing pitcher in Don Larsen's perfect game on October 8th. After his playing days ended, he became a coach. He was a member of the Boston Red Sox staff from 1960 to 1962 and again in 1966 and 1967. Maglie also served a stint on the Seattle Pilots coaching staff in their only season, 1969.