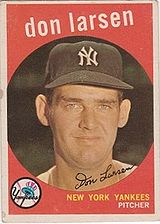 "They can never break my record. The best they can do is tie it. October 8, 1956, was a mystical trip through fantasyland. Sometimes I still wonder whether it really all happened." - Larsen

"On a team of many stars, Don illustrated that anyone can make history — even perfection — on our sport’s biggest stage." - Commissioner Rob Manfred

Despite only 81 wins and a sub-.500 record in a 14-year career, Don Larsen achieved baseball immortality by pitching a perfect game in the 1956 World Series.

Born in Indiana, Larsen moved in his teen years to San Diego, CA, where he starred in baseball and basketball at Point Loma High School. After high school, he was signed by the St. Louis Browns. He made his pro debut with the Aberdeen Pheasants in 1947 and won 17 games with the club the next year. He rose through the Browns' system over the next two seasons before being drafted. After serving two years in the Army, Larsen was discharged in 1953. He reached the majors that year and went 7-12 in his rookie campaign for the last-place St. Louis club. The team became the Baltimore Orioles in [[[1954 Orioles|1954]], and he went 3-21 for them, leading the American League in losses. However, two of those wins came against the New York Yankees, the team that acquired him following the season as part of a 17-player trade.

Larsen began 1955 with the AAA Denver Bears, going 9-1 in 13 starts, before returning to the big leagues with the Yankees. His success continued in New York, as he went 9-2 with a 3.06 ERA in 13 games. However, he struggled in that year's World Series against the Brooklyn Dodgers, starting Game 4 and taking the loss after giving up 5 earned runs in 4 innings of work.

Larsen won a career-high 11 games in 1956 while posting a 3.26 ERA. He started Game 2 of that October's World Series against the Dodgers but was pulled from the game in the 2nd inning after facing only ten batters. He returned to the mound at Yankee Stadium in Game 5 on October 8th. Throwing just 97 pitches, he retired all 27 batters he faced, notching 7 strikeouts while pitching the only perfect game in postseason history. Upon completion of the game, catcher Yogi Berra ran to the mound and leapt into Larsen's arms. The Yankees went on to defeat Brooklyn in seven games, and Larsen was named World Series MVP.

In 1957, Larsen had another solid season, winning 10 games before going 1-1 in a World Series loss to the Milwaukee Braves. He won 9 more games for New York in 1958 and added one more in a World Series triumph over the Braves. After winning 6 games for the Yankees in 1959, he was dealt to the Kansas City Athletics after the season as part of the trade that brought Roger Maris to New York.

Larsen went just 1-10 for the last-place A's in 1960 and was briefly sent down to the minors. He was traded to the Chicago White Sox in the middle of the 1961 campaign, and then moved on to the San Francisco Giants. Now a reliever, he won 5 games and saved 10 for the Giants in 1962 and returned to the World Series for the fifth time in his career. On October 8th, the sixth anniversary of his perfect game, he earned the win over the Yankees at Yankee Stadium, but San Francisco went on to fall to New York in seven games. Larsen remained with the Giants until 1964, when he moved on to the Houston Colt .45s. He was then traded back to the Orioles in 1965. After spending the entire 1966 season in the minors, he briefly returned to the big leagues with the Chicago Cubs in 1967, appearing in 3 games. He was back in the minors in 1968 and ended his career without returning to the majors.

Larsen ended his major league career with a mediocre 81-91 record. Away from the mound, he was a better-than-average hitting pitcher and cranked out 14 career homers and a .242 lifetime batting average. He also set a major league record for pitchers in 1953 with 7 straight hits. There was some push to have him named to the Hall of Fame in spite of his mediocre career record, on the basis of his one exploit, but the campaign never amounted to much.

After baseball, Larsen worked as a paper company salesman for many years before retiring with his wife to Idaho. He happened to throw out the first pitch at Yankee Stadium at the game in which David Cone threw a no-hitter. He was Inducted into the Indiana Baseball Hall of Fame in 2005. He died of esophageal cancer on January 1, 2020 at age 90.

"Don Larsen used to pitch so slow it ought to have been equipped with backup lights." - Shirley Povich