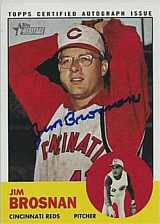 "I don't mind catching your fastball at all. Naturally, I'd want to have a glove on in case you might be having an especially good day." - Gene Green, joking with Jim Brosnan

“[General manager John] Holland's words... 'I don’t know whether this is good news or bad news'... and ‘We appreciate all you’ve done for the organization,’ while probably well intentioned, were spoken like a poor actor at first rehearsal. The self-hypnosis about the Grand Nature of the Good American Game tends to delude the managers of baseball.” - Jim Brosnan, to Sports Illustrated, after being dealt from Chicago to St. Louis, July 21, 1958

Jim Brosnan is best known as the author of two "diary style" books about his experience as a player, The Long Season and Pennant Race. His books were a revelation at the time, both because they were the first to expose baseball's warts - as Jim Bouton's Ball Four would do on a grander scale a decade later - and because he wrote them without the aid of a ghostwriter.

Brosnan pitched from 1947 to 1955 in the minors, missing the 1951 and 1952 seasons due to military service. He eventually broke in with the Chicago Cubs in April 1954. It was the first full season for the Ernie Banks and Gene Baker double play combination which broke the color line on the North side of Chicago. He spent part of 1954 back in the minors and all of 1955 with Los Angeles in the Pacific Coast League, going 17-10 for the Angels. Brosnan pitched nine years in the majors, recording 55 wins and 67 saves. In 1958, his ERA was seventh-best in the league, while in 1961 his 16 saves were third-best and his .714 winning-percentage was also third-best. He pitched in three games of the 1961 World Series with the Cincinnati Reds.

His ambition to be a writer was a long-time one and he got his first chance to exercise his talents when the St. Louis Post-Dispatch asked him to pen a series of articles about the 1958 St. Louis Cardinals' tour of exhibition games in Japan following the regular season. This led to his receiving a contract to write a book about the 1959 season, which turned into the classic baseball book The Long Season, published in 1960. During Cincinnati's pennant push of 1961, Brosnan kept another diary, which became the basis for Pennant Race, published in 1964.

Following his playing days, Jim appeared as himself on the June 13, 1966 episode of classic game show To Tell The Truth. None of the celebrity panelists were able to correctly choose the real Jim Brosnan. He also wrote a book for boys, Little League to Big League, Great Baseball Pitchers and Great Rookies of the Major Leagues. He was a 2007 inductee of the Baseball Reliquary's "Shrine of the Eternals". Brosnan died in hospice in 2014.