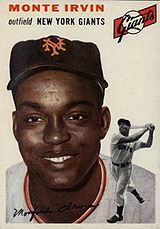 Through 2006, Monte Irvin is the only left fielder who has been voted into the Salón de la Fama; he is more famous, of course, for his inclusion in the Hall of Fame in Cooperstown. He played a decade in the Negro Leagues before becoming the first black player in the history of the New York Giants. In addition to his star play in the majors, Negro Leagues, Mexican League and minor leagues, he also posted impressive numbers in the Puerto Rican Winter League and is a member of the Cuban Baseball Hall of Fame. He later worked as an assistant to the commissioner and chaired the Special Committee on the Negro Leagues.

As one of the leading players in the Negro Leagues immediately prior to integration, he was one of the players being considered to break the color barrier in Major League Baseball, before the Brooklyn Dodgers settled on Jackie Robinson to be the trail-blazer. He had the same qualities that Robinson had, including a college education, but was coming off a long stint in military service, seeing service in European battlefields, and felt he was not ready to take on such a burden immediately after his discharge.

In 1935, he was named to the all-New Jersey scholastic team, a team that included two other future big leaguers, George Case and Hank Borowy. He nearly died during his teen years due to illness but recovered amazingly. He earned 16 letters in high school sports in football, basketball, baseball and track and set the New Jersey state record for javelin throwing.

Irvin had a scholarship offer from the University of Michigan but could not afford the train fare so instead he accepted an offer from Lincoln University in Pennsylvania. He spent two years there, during which he began his pro baseball career under the pseudonym "Jimmy Nelson" to protect his amateur standing.

Presenting himself to the Newark Eagles as a shortstop, manager and Hall-of-Fame shortstop Willie Wells advised him to try the outfield instead as Wells said there was no way he was making the team at Willie's own position.

Monte became a regular with Newark in 1939 and the 20-year-old hit .365, fourth in the Negro National League behind only Ed Stone, Wild Bill Wright and Buck Leonard; he edged out Wells, who was 5th. He went 3 for 12 in the post-season.

In 1940, Irvin hit .383, second in the NNL to Lenny Pearson (a former high school teammate). The youngster hit 16 doubles, second to Leonard. In the 1940-1941 Puerto Rican Winter League, he only hit .245. During the 1941 season, Monte batted .382, third in the NNL. His 7 doubles tied Vic Harris for third and his 9 homers tied Buck Leonard for the league lead. Though he was not among the leading vote-getters, he started for the East in the 1941 East-West Game, playing third base and batting 5th. He went 2 for 5 with a double and a stolen base. He also made a leaping one-handed grab of a liner by Dan Wilson that was called "spectacular" by a Chicago Defender sportswriter.

In Puerto Rico that winter, he batted .297 but led the league with 18 doubles. He averaged an extra-base hit every 5.9 AB.

During the 1942 season, Irvin burst out of the gate with a .531 mark, then jumped to the Mexican League's Veracruz Blues.

The fact that Irvin is the sole left fielder inducted in the Salón de la Fama's first 70 years is impressive enough until you consider that he did despite playing only 63 games in Mexico, probably the shortest career ever by an American so enshrined. He hit .397/~.502/.772 in those games, though, scoring 74 runs, driving in 79, walking 50 times with only 19 strikeouts, stealing 11 bases, ringing out 94 hits, 17 doubles, 6 triples and 20 home runs. Despite not playing a full season, he led the Liga in home runs and in average and was only 4 RBI behind leader Silvio Garcia. Oddly, he did not even play left field in Mexico - he played second base, yet the Salón lists him as a left fielder in their position listing.

Irvin served in the Army during World War II, spending three years in Europe with the Army Engineers. This was no cushy job, in contrast with some other inducted players who were essentially performing public relations and playing baseball on the side. Irvin was part of a regular unit, the 1313th Engineer General Service Regiment, and saw combat action during the Battle of the Bulge, the last major German offensive of the war, in December 1944-January 1945.

Irvin returned to Newark for the very end of the 1945 season and hit .222 in five games. He went 4 for 8 in an exhibition series against white major leaguers. That winter, he batted .368 in Puerto Rico and lost the batting title by .0007 to Fernando Diaz Pedrozo; he was hampered by a broken wrist. Irvin's San Juan Senadores won the title. He was approached by the Brooklyn Dodgers at that time, as they were looking for an appropriate player to break the color barrier, but he turned down their approaches, feeling he was not ready for such an undertaking so soon after his discharge from the military. As a result, the Dodgers signed Jackie Robinson for the historic mission; also an Army veteran, Robinson had been discharged earlier, without being sent to Europe.

In 1946, five years after his last full season in the Negro Leagues, Irvin showed he had not missed a beat. Now playing shortstop alongside 2B Larry Doby, Monte hit .349 to finish 5th in the NNL. He hit 9 homers, second to Josh Gibson, and his 11 doubles trailed Gibson by just one. In the first 1946 East-West Game, Irvin hit 5th and played left for the East. He went 1 for 3 with a run, RBI and stolen base. In the second 1946 East-West Game, he hit 5th and played left again and was 1 for 4 at the plate.

In the 1946 Negro World Series, Irvin hit a three-run homer in Game 4 off Satchel Paige. In Game 6, Monte blasted two homers in a 9-7 victory. In Game 7, he drew a walk from Ford Smith and then scored the Series-winning run on a double by Johnny Davis. He had led the Series with a .462 average, 3 homers and 8 RBI.

Irvin played for Jackie Robinson's All-Stars in an exhibition series against white major leaguers. In Puerto Rico, he again just missed a batting title; he hit .387, three points behind Willard Brown. He had hit .355 in his Puerto Rican Winter League career.

The Newark shortstop did not slow down much in 1947, which was the year Robinson made his major league debut, followed later that season by a few other Negro Leagues stars, including Larry Doby. He hit .317 and his 14 homers tied double-play mate Doby for the league lead. His 18 doubles ranked one behind league leader Henry Kimbro and his 19 steals placed him third in the loop. In the year's first East-West contest, he was 0 for 3 with a run. He hit cleanup and played left for the East. In the second East-West outing of the year, Irvin again cleaned up for the East and played in left. He was 1 for 3 and scored one of their two runs.

Back with Almendares, Irvin hit .274/?/.490 with 52 runs, 53 RBI and 19 steals. He led the CWL in home runs (10) and was one behind Pearson in the RBI race. He joined Alejandro Crespo and Hank Thompson on the league All-Star team.

In the first Caribbean Series, Monte continued to shine. He led the Series with 2 homers and 11 RBI and hit .389/?/.833 for Almendares as they swept their way to the title.

The Brooklyn Dodgers now signed Irvin but Newark owner Effa Manley demanded compensation. Branch Rickey refused to pay for his Negro League players at this point and said he had no further interest in Irvin. Manley tried to sell him to the New York Yankees but they maintained a whites-only policy. She then sold him to the New York Giants and said "They paid me $5,000 lousy dollars for Monte Irvin. If he'd have been white they'd have given me $100,000." Irvin, along with Ford Smith, became the first African-American players in the history of the Giants organization on January 28th.

Irvin batted .312/.415/.514 for the Giants in 1951, despite being 32 years old and past his prime. He scored 94 runs, hit 11 triples and 24 homers, drove in 121, drew 89 walks while only striking out 44 times and went 12 for 14 in steals. He had an excellent 147 OPS+. He fielded .996 in the outfield, making only one error all season. He finished third in voting for the 1951 National League Most Valuable Player Award behind Roy Campanella and Stan Musial and was second to Campy in first-place votes. He was 5th in the 1951 NL in average, 4th in OBP, 7th in slugging, 6th in OPS, tied with Pee Wee Reese for 10th in runs scored, 7th in hits (174), 9th in total bases (287), was third in triples (one behind co-leaders Musial and Gus Bell), tied with Earl Torgeson for 10th in homers, led in RBI (12 ahead of runner-ups Ralph Kiner and Sid Gordon), was 7th in walks, tied for 8th in steals, was 6th in OPS+, 4th in runs created, fifth in times on base (272) and tied for third with Jackie Robinson in times hit by pitch (9). In the 1951 World Series, Monte hit .458/.500/.542, leading in average and tying a World Series record with his 11 hits. In game one of the Series, he stole home, which he later recalled as his biggest thrill in baseball. Allie Reynolds had gone into a long wind-up and Irvin took advantage, beating the pitch by "about 6 inches."

Irvin's career took a bad turn in 1952 when he fractured his right ankle durign a exhibition game in Denver, CO on April 2. He would miss most of the season. With the 1952 Giants, Irvin produced at a .310/.365/.437 clip in the 46 games he played in. He was chosen for the 1952 All-Star Game but did not play due to his injury and never played in a MLB All-Star Game as a result.

Irvin played four games for the 1957 Los Angeles Angels, going 3 for 10 before retiring due to physical problems.

Irvin scouted for the New York Mets after his playing career ended. From 1951-1968, he worked as community relations director for Rheingold Brewery when not playing baseball. In 1968, he was appointed as an assistant to the commissioner of Major League Baseball and he served in that role through 1984. He chaired the Hall of Fame's Special Committee on the Negro Leagues and after that was dissolved, he served on the Committee on Baseball Veterans.

At the time of his death in 2016 at the age of 96, he was the 8th-oldest living former major leaguer.