Note: This page links to Hall of Fame outfielder Willard Brown. For the former major league first baseman and catcher who played from 1887 to 1894, click here. 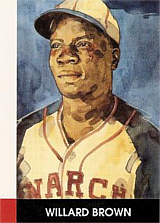 Inducted into the Hall of Fame in 2006

“Brown is what we called a Sunday player... Willard liked to play on Sundays when we had a full house. If the stands were full you couldn’t get him out. He could play baseball as good as he wanted to. If the stands were half empty, you might find Brown loafing that day. In fact, he didn’t play on rainy or cloudy days. That’s why we called him Sonny. He loved to play on sunny days and before big crowds. And he was a real crowd pleaser.” - Sammie Haynes, to Larry Lester and Sammy Miller, Black Baseball in Kansas City

Brown began his career with the Kansas City Monarchs in 1935 and played with them for more than a decade, missing time while serving in the Army during World War II. At age 32, he was signed by the Browns in July 1947, along with Hank Thompson. He made his big league debut on July 19th and, four days later, he went 4-for-5 against the New York Yankees. His home run on August 13th was the first hit by a black player in the history of the American League; it was an inside-the-park shot off future Hall of Famer Hal Newhouser of the Detroit Tigers. Brown hit just .179 in 21 games and was let go by St. Louis.

An article in the 1948 Sporting News Guide (page 341) reported that he lead the Puerto Rican League in 1947 in batting average, .432; home runs, 27; RBI, 86; and runs scored, 79. He returned to the Negro Leagues and later found success in the minors in the Texas League. When playing baseball in Puerto Rico, Brown was known as "Ese Hombre" which, translated to English, would be "That Man".