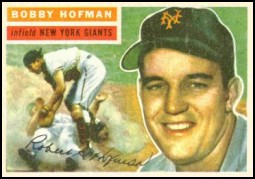 The nephew of Solly Hofman and Oscar Hofman, infielder Bobby Hofman served in the U.S. Army in World War II prior to reaching the majors. Upon retiring as a player, he was tied with Fred (Cy) Williams for the most pinch-hit home runs, lifetime (9, a record since broken). He hit his last on May 27, 1955.

He appeared in the field during 205 of his 341 career games in the majors. The most common position for him was second base, where he had 82 appearances - a lot fewer than his games as a pinch-hitter.

After his playing days ended, he was a Kansas City Athletics coach in 1966 (he also guided the Arizona Instructional League A's team that year) and 1967 and a member of the Washington Senators staff in 1968. He coached for the Oakland Athletics in 1969 and 1970 before spending the next two seasons with the Cleveland Indians. He returned to the Athletics staff again in 1974, 1975, and 1978. He was the Scouting Director for the New York Yankees from 1980 to 1984 and the director of player development from 1985 to 1988.

All in all, Hofman spent over 40 years in baseball as a player, coach, executive and minor league manager, retiring in 1989 and dying from cancer less than five years later.