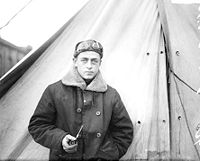 Philip K. Wrigley was a chewing gum mogul and the longtime owner of the Chicago Cubs. He inherited the club when his father, William Wrigley Jr., died in 1932. He was not an avid baseball fan but did not sell the team in honor of his father. He considered himself an innovator in the field of business, however, and tried to adapt some new methods in baseball as well, for example by hiring sports psychologist Coleman Griffith to work with the team from 1938 to 1940.

He was often criticized for the way he ran the club and his refusal to install lights in Wrigley Field. Mike Royko was critical of his hesitation to integrate and make the Cubs more competitive in the late 1940s and in the early 1950s. Beginning in 1961, Wrigley replaced the position of manager with a "College of Coaches", but the plan was abandoned within a few years when it showed no sign of success. After his death in 1977, his family, led by his son Bill Wrigley, sold the Cubs to the Tribune Company.