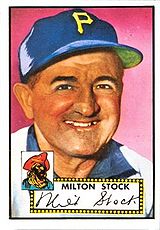 "In an otherwise ordinary career, Stock did something extraordinary (in 1925). He had four hits in four consecutive games, a major league record that has stood, unbroken and untied, for 82 years." - from a Los Angeles Times article, May 16, 2007, about Rafael Furcal getting four hits in three straight games

Milt Stock played 14 years in the majors, all in the National League, and later was a minor league manager and major league coach. He led the league in singles twice and sacrifice hits once, and was as high as fifth in the league in batting average.

In 1919, he was traded to the St. Louis Cardinals and in his first year with them, he played second base and Rogers Hornsby played third. Stock had not previously played second in the majors. The next year, the two switched around and Stock spent the next four years playing third base. When he came to the Brooklyn Robins in 1925, he played second base again. He is believed to be the only major league player with 4 or more hits in each of 4 consecutive games (Rafael Furcal had 3 in row in 2007). Stock retired early in 1926 after being seriously injured in spring training.

After his playing career ended, Milt Stock managed in the minor leagues for many years. He also served as the business manager, secretary, vice-president, or president for many of these teams. He served as president of the Mobile Red Warriors in 1932 and the Quincy Indians in 1933, while not managing. Stock then joined the Chicago Cubs as a coach in 1944 and remained with the club for five seasons. He later spent 1949 and 1950 as a member of the Brooklyn Dodgers staff and was with the Pittsburgh Pirates in 1951 and 1952.

Stock was the father-in-law of Eddie Stanky.