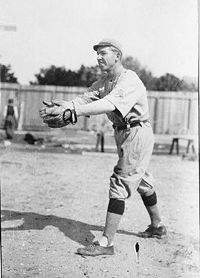 George "Possum" Whitted played 11 seasons in the big leagues, all in the National League. While mostly a left fielder, he played significant numbers of games at every position except pitcher and catcher.

Whitted appeared in the 1914 World Series and the 1915 World Series. He was part of the Miracle Braves team in 1914 and batted clean-up in the Series.

In 1922-23 he was player-manager for Toledo while in 1927-32 he managed Durham (and also played for the team during most of those years).

Whitted wrote an article appearing in the March 1918 issue of Baseball Magazine titled "Making Good in the Majors: How a Ball Player May Improve Himself by Hard Work and Perseverance". It is full of details about his career. He acknowledged not playing well for St. Louis, and was at first not happy about being traded to the Braves. Later, when the Braves traded him, he wasn't happy about that either. He had trouble hitting the curve ball when he first arrived at the majors. He didn't see a future as a major league infielder so he practiced playing outfield ("I chased miles and miles after fly-balls.").