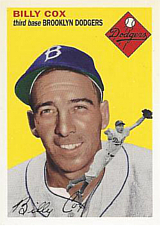 "That ain't no third baseman. That's an acrobat." - Casey Stengel

Billy Cox was the primary third baseman with The Boys of Summer Brooklyn Dodgers clubs. Before Brooks Robinson, he was regarded as baseball's premier glove man at the hot corner.

Cox originally signed with the Pittsburgh Pirates in 1940, coming up as a shortstop in 1941 after batting .363 to win the Inter-State League batting title with the Harrisburg Senators. In 10 games, he acquitted himself nicely, batting .270/.325/.405. Projected to replace the great Arky Vaughan, World War II intervened. Billy spent the next four years in the United States Army, including 18 months at Guadalcanal. He returned from the war a nervous wreck, having dropped from 167 pounds to 132, and would suffer bouts of malaria that he had developed throughout the rest of his career. Additionally, he battled nervousness from having seen the horrors of war up close and personal.

Billy returned in 1946 to bat .290/.333/.387, best average on the club, and slugged a career high 15 home runs in 1947 en route to a .274/.313/.442 line in 132 games. On December 8, he was traded with close friend Preacher Roe and Gene Mauch to the Brooklyn Dodgers for 37-year-old Dixie Walker and pitchers Hal Gregg and Vic Lombardi. With Hall of Fame shortstop Pee Wee Reese locking down shortstop, the legendary Jackie Robinson manning second and Gil Hodges coming into his own on first base, Billy moved to third base, beating out Spider Jorgensen to win the job in spring training. Over the next several seasons, Billy would inevitably fight off a swarm of young pups trying to wrest third base from his clutches and assume regular duty. He took to the new position almost immediately, wowing with his play by leading the league in fielding in 1950 and 1952. During this time, the Dodgers were routinely pennant contenders, taking the crown in 1949 and 1952 while losing the legendary playoff to the New York Giants in 1951 (a year in which Billy hit .279/.336/.411 in 142 games). In the 1952 World Series against the New York Yankees he was outstanding with the glove, chipping in a .296/.367/.370 line with four runs scored.

Prior to the 1953 season, he found out through the press that Charley Dressen declared Junior Gilliam an infield starter, Jackie Robinson the new third baseman and Billy a utility man. But his desire to play and hot bat eventually pushed Jackie to left field, Cox playing 100 times and hitting a career best .291/.363/.443 with 10 home runs. In the 1953 Fall Classic, he did his best work, batting .304/.333/.565 with a homer and six RBI in another loss to the Yankees. Though he did not know it at the time, he had made his final World Series appearance, having batted .302/.351/.453 in 15 total games. He would not play more than 100 games again, playing just 77 times while being reduced to part-time duty by Walter Alston in 1954.

Billy missed the Dodgers' 1955 championship when he was traded, along with Preacher Roe again, to the Baltimore Orioles in 1955. Roe retired and Billy only played 53 times for the Birds, walking away at the June 15 trading deadline after having been dealt to the Cleveland Indians. About that time, the Birds signed Brooks Robinson, a player whose defensive exploits would make many forget Cox's wizardry. In eleven seasons, Cox played 1,058 games, batting .262/.318/.380 (974-for-3,712) with 66 home runs and a fine .962 fielding percentage.