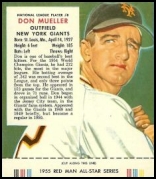 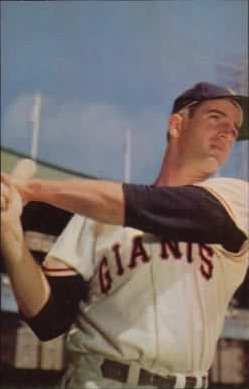 Outfielder Don Mueller played a dozen seasons in the majors, mostly for the New York Giants, and was a two-time All-Star. He hit over .300 three times and posted a career batting average of .296.

The son of former National League outfielder Walter Mueller, Mueller was born and raised in St. Louis. After attending Christian Brothers College High School, he was signed by the Giants prior to the 1944 season. He spent most of his minor league career with the Jersey City Giants, recording a career minor league batting average of .335. He reached the majors in 1948 and became New York's regular rightfielder in 1950, hitting .291 that year.

Although not a power hitter, Mueller hit three home runs in a game against the Brooklyn Dodgers at the Polo Grounds on September 1, 1951, and added two more against Brooklyn the next day. Later that season, he played a key role in the Giants playoff game against the Dodgers on October 3rd. With the Giants trailing 4-1 in the bottom of the 9th, he helped to set up the "Shot Heard 'Round the World" by singling off Don Newcombe through the hole between first and second base, moving Alvin Dark to third. On Whitey Lockman's double, he hurt his ankle sliding into third base and had to be replaced by pinch-runner Clint Hartung, who scored when Bobby Thomson followed with his immortal homer off Ralph Branca that sent the Giants to the World Series. Mueller missed that series because of the injury.

Mueller had his best season in 1954, leading the National League with 212 hits, and making the All-Star team. Going into the season's final day, he narrowly paced the circuit with a .343 batting average (with teammate Willie Mays right behind at .342). He went 2-for-6 off Philadelphia Phillies pitcher Robin Roberts in the last game, but Mays went 3-for-4 and won the crown .345 to .342. Mueller finished 12th in the Most Valuable Player voting (won by Mays). He also saw the only World Series action of his career that year, going 7-for-18 in the Giants' four-game sweep of the Cleveland Indians.

Mueller was again an All-Star in 1955, when he hit .306. He also put together a 24-game hitting streak and recorded hits in 30 of his first 33 appearances that year. He was purchased by the Chicago White Sox prior to the 1958 season and played his final two seasons with the club. However, he was released by the Sox early in the 1959 season and did not play for the team in that year's World Series.

Following his baseball career, Mueller was a building inspector for an insurance company. He died in 2011 at age 84.