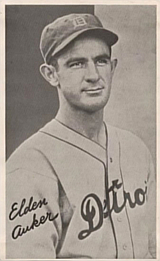 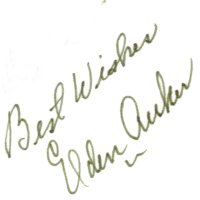 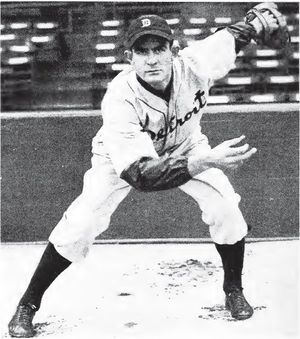 "You probably won't remember me, but I'll remember you as long as I live." - then California Governor Ronald Reagan, shortly after his election, remembering his interviewing Auker as a young Chicago Cubs broadcaster during the 1935 World Series

Elden Auker was a major league pitcher from 1933 to 1942. After a football injury while playing at Kansas State University, Auker developed his signature sidearm pitching motion, using the whiplike motion to strike out Babe Ruth when he was a rookie in 1933. Yet he never was much of a strikeout pitcher, obtaining a career-high of 86 in 1934.

Auker turned in a solid career for three clubs, recording double digits in wins in eight of his ten seasons. In 1935, he led the league in winning percentage. Auker also pitched in both the 1934 and 1935 World Series for the Detroit Tigers. He started Game 4 of the 1934 Series against the St. Louis Cardinals and pitched a complete game victory, 10-4. He was then selected to start the decisive Game 7, going against Dizzy Dean, but things did not go so well. He was roughed up, left with one out in the 3rd, and the Cards won handily, 11-0. In the 1935 Fall Classic, against the Chicago Cubs, he had a no decision in game 3, battling "Big" Bill Lee, in a game the Tigers won in 11 innings. It was his only game of the Series, as the Tigers went on to claim the first Championship in team history.

He quit baseball to run his engineering firm, which produced abrasives critical to the war effort. Auker also said that after he retired, he would play golf in Florida with Babe Ruth and some of the other retired players. Later in his life, he was prominently featured in the HBO documentary When It Was a Game. His memoirs are titled "Sleeper Cars and Flannel Uniforms".

When he died in 2006, Auker was the last living pitcher to have faced Babe Ruth. He was married for 73 years to his wife, Mildred.