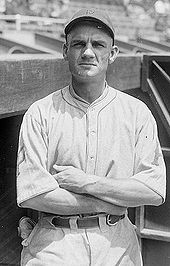 Inducted into Hall of Fame in 1961

"Never run the bases with your head down - keep your head up and see what is going on. Base running judgment comes from the eyes. Use them! And don't be sloppy. Keep your uniform looking nice. Be a gentleman on and off the field." - Max Carey 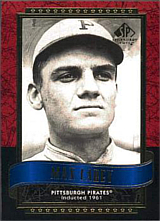 Hall of Fame outfielder Max Carey was one of the most prolific base stealers of his era and perhaps the greatest baserunner in the history of the National League.

Born Maximilian George Carnarius, Carey was born and raised in Indiana. He studied to become a minister before embarking on a baseball career. He began his pro career with the South Bend Greens of the Central League in 1909. He hit just .158 in 48 games in his first season but improved to .294 for South Bend in 1910 before being sold to the Pittsburgh Pirates. He went 3-for-6 in his first taste of big league ball with the Pirates and never returned to the minors. 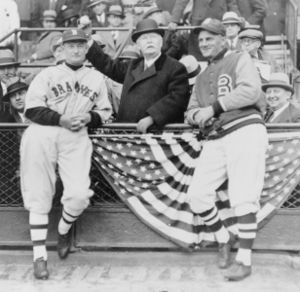 After his playing days, Carey was a Pirates coach in 1930 and skipper of the Brooklyn Dodgers in 1932 and 1933. He later was a manager in the AAGPBL, guiding the Milwaukee Chicks to the 1944 title and later piloting the Fort Wayne Daisies in 1950-51. He also served as president of that league from 1944 to 1949.

1) Carey won an NL record 10 stolen base titles (only Rickey Henderson led his league more often). He once scored 5 runs in a game without picking up a hit. He is the all-time NL leader in steals of home with 33 (only Ty Cobb had more in a career). We lack caught stealing data for much of Carey's career, but he still made the Guinness Book of World Records for his 1922 season: 51 steals in 53 tries, a record still unmatched despite much higher steal success rates in later decades. He also once reached base 9 times in a game.

2) Carey was a great defensive center fielder. He ranks among the top 10 all-time in chances per game in the outfield, 7th in outfield assists and 3rd in double plays by an outfielder (behind only Tris Speaker and Cobb). In 2000, Total Baseball ranked him 16th all-time in fielding wins, regardless of position; among outfielders only Speaker and Richie Ashburn were higher.

3) The bulk of his career was in the deadball era, making his stats appear lesser in relation to players from higher-offense eras.