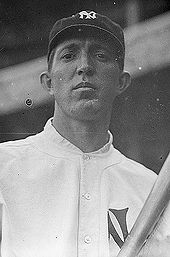 "Ezra Midkiff has beaten out Roy Hartzell for the third base job on Chance's infield. Hartzell will be retained for utility work." - from the Sporting Life issue of March 22, 1913, about Midkiff becoming a major league regular; Hartzell would become the team's regular second baseman that season

Ezra "Salt Rock" Midkiff was the third baseman for the 1913 Yankees. The following year Fritz Maisel had the job, and in 1916 Home Run Baker took over the position.

Midkiff, for his part, was sold to the minor league Baltimore Orioles, where he was a teammate of Babe Ruth before Ruth came to the majors.

Midkiff was nicknamed "Salt Rock" because he was born in a town of that name. He and Dick Midkiff are the two major leaguers with the last name Midkiff.

Ezra managed at least five seasons in the minors.

This manager's article is missing a managerial chart. To make this person's article more complete, one should be added.
Retrieved from "https://www.baseball-reference.com/bpv/index.php?title=Ezra_Midkiff&oldid=835523"
Categories: