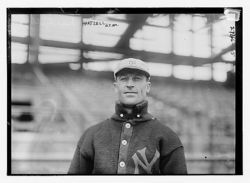 "The handiest utility man the Yankees ever had . . . he has played every position on the club except battery positions. . . Hartzell was a steady, reliable player, and versatile enough to be shifted from position to position." - from a Jan. 5, 1914 article in the New York Times about Hartzell being in demand to manage Denver, something he did not do until three years later

Roy Hartzell was a major leaguer for 11 seasons during the dead-ball era, playing significant numbers of games in both the outfield and the infield.

Hartzell was born in Golden, CO and was one of the earliest Colorado-born players to come to the majors. He was not the first born in Golden, however, as Cowboy Jones had been born there in 1874, seven years before Roy was born there.

Roy attended Golden High School and played in the Western League from 1902-05. He made his major league debut in April with the 1906 St. Louis Browns and became their regular third baseman. He hit only .213, though, and the following year, when he hit .236, he spent part of the season at St. Paul.

After the 1910 season he was traded to the New York Highlanders and spent the rest of his major league career with them. He was a third baseman in 1911, split equally between third and outfield in 1912, mostly a second baseman in 1913, and an outfielder in 1914-16.