The 1913 New York Yankees played their eleventh season in New York and thirteenth overall. The team finished with a record of 57-94, coming in 7th place in the American League.

With an otherwise lackluster season, the most noteworthy event for the 1913 Yankees was switching their home field from Hilltop Park to the Polo Grounds. The Yankees had lent their home to the National League's Giants during the rebuilding of the Polo Grounds following its disastrous fire in 1911. The Giants returned the favor in 1913, subleasing to their American League rivals after the Highlanders' agreement to play at the aging, and wooden, Hilltop ballpark had ended. It was not a happy change of homes, however, as the Yankees set a major league record by losing 17 games, with one tie, before recording their first home win of the season on June 7th, which is also the latest date in a (normal) season for a team to record its first home win.

At that time, the Giants were one of the strongest teams in baseball, winners of two consecutive league championships, and they would win their third in a row in 1913. The Yankees were seen as no threat to their status, and would provide additional revenue. Little did the Giants suspect what the future held for the respective clubs' status in the city and in baseball. 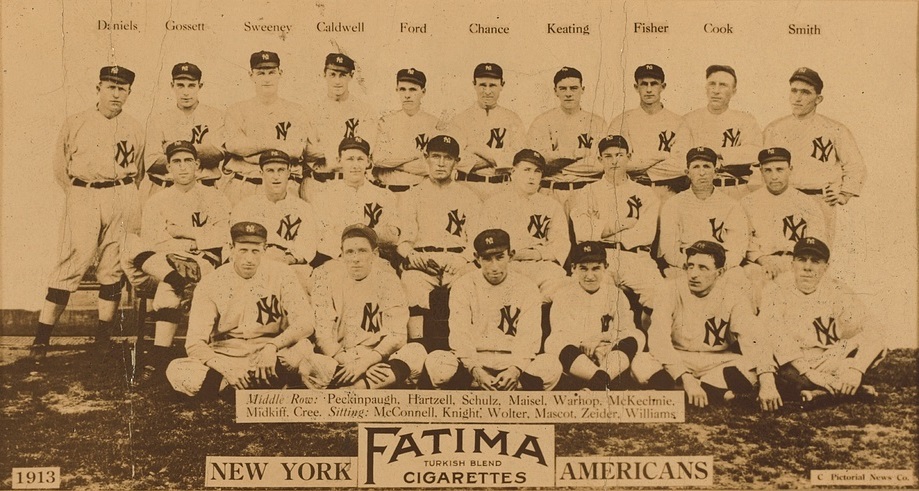 The nickname "Yankees" was now in frequent popular usage, and with the move of just a few blocks from the Hilltop to the bottomland of Coogan's Hollow next to the Harlem River, the alternate nickname "Highlanders" no longer made logical sense, and was dropped. Thus "Yankees" became the exclusive nickname of the New York American League franchise.