The 1903 New York Highlanders finished in 4th place in the American League with a record of 72-62. The team was managed by Clark Griffith and played its home games at Hilltop Park (formally "American League Park"). The season began with the Baltimore Orioles relocating to New York, NY. The club was at first officially the "Greater New York" baseball club, in deference to the established New York Giants.

The media dubbed the team as "Highlanders", due in part to playing at one of the highest points on Manhattan ("The Hilltop"), which was somewhat higher in altitude than the bulk of Manhattan and was considerably "uphill" from the Polo Grounds, the Giants' established home, which sat in the bottomland in Coogan's Hollow, a few blocks east and south of the Hilltop.

"Highlanders" was also originally short for "Gordon's Highlanders", a play on the name of the team President during 1903-1906, Joseph Gordon, along with the noted British military unit called The Gordon Highlanders. The club was also derisively called "Invaders" in 1903, presumably by writers favorable to the Giants.

The New York press was creative with analogous nicknames for teams. In addition to "Highlanders", the team would soon acquire the alternate nickname "Yankees". That word is a synonym for "American" in general, and short for American Leaguers or "Americans" in this case. Given the media's penchant for citing popular culture, that nickname was also possibly influenced by the then-current and hugely popular America-centric George M. Cohan Broadway play, "Little Johnny Jones", and its centerpiece song, "Yankee Doodle Dandy". New York writers had similarly coined both the established nickname Brooklyn "[Trolley] Dodgers" and the nickname "Superbas" that the denizens of Flatbush carried for awhile. As with the Highlanders, the latter was based on something unrelated, namely a circus act called "Hanlon's Superbas"; the Dodgers were managed by Ned Hanlon at that time. 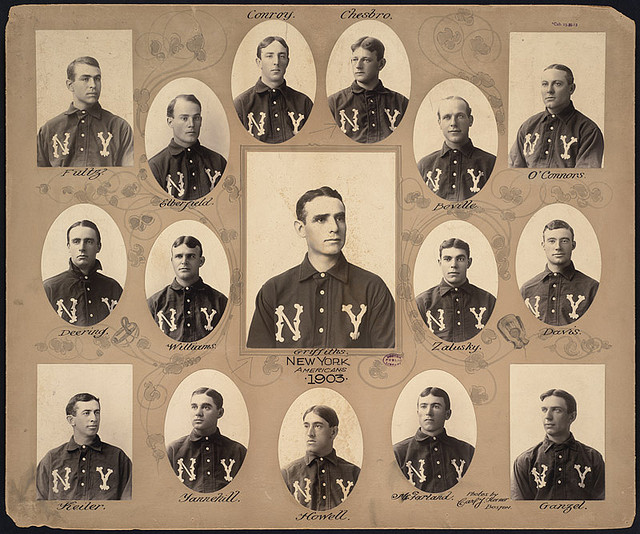