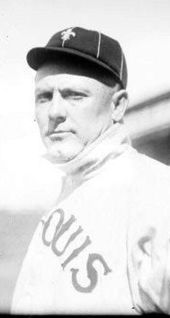 Nicknamed "Rowdy Jack", Jack O'Connor played 21 seasons in the majors, most notably for the Cleveland Spiders in the 1890s. Primarily a catcher, he also saw a lot of action in the outfield and at first base. He also managed the St. Louis Browns for a year and umpired a few games in the American Association (1889) and in the National League (1893 and 1901).

A St. Louis native, O'Connor played for the St. Joseph Reds of the Western League before reaching the majors. His big league career began with the Cincinnati Red Stockings of the American Association in 1887. Playing for the Columbus Solons in 1890, he had his most impressive year with the bat, hitting .324, good for eighth in the AA. 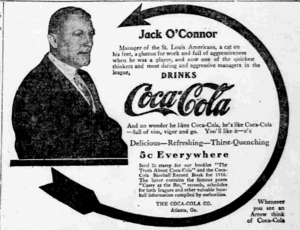 When the American Association folded after the 1891 season, O'Connor moved on to the Cleveland Spiders of the National League, where his teammates included Cy Young and Patsy Tebeau. Prior to the 1899 season, he was acquired by the St. Louis Perfectos. After a year and a half there, he was purchased by the Pittsburgh Pirates for $2,000. With Pittsburgh, he was a teammate of Honus Wagner and Fred Clarke and a member of pennant-winning clubs in 1901 and 1902. He jumped to the New York Highlanders of the American League in 1903, and after one year there, he was traded to the St. Louis Browns. In 1906, he set a record for most hits in a season without an extra-base hit; he collected 33 hits, all singles, that year, and the record still stands.

In reality, O'Connor's big league playing career ended in 1907. However, he was the Browns manager in 1910, and he put himself into one game. As Browns skipper, he was hugely unsuccessful, finishing in last place in the AL with a 47-107, more than 20 games out of seventh place.

Following his big league days, O'Connor managed the Cleveland Forest City in the short-lived outlaw league, the United States League, in 1912 and the St. Louis Terriers in the Federal League in 1913.

O'Connor was long listed as being born in 1869, but census records show his year of birth as 1866. He is one of nine major leaguers with the last name "O'Connor" (through 2009), along with one other also named Jack O'Connor.