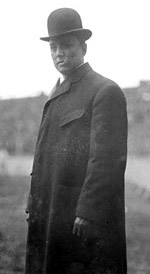 James Robert McAleer spent the bulk of his fourteen-year professional playing career with the Cleveland Spiders. He is regarded by some sports historians as an instrumental figure in the formation of the American League.

He became a member of a Youngstown minor league baseball club in 1882, remaining with the team until 1884. The following year, he joined another minor league club in Charleston, SC; and in 1887, he played for a team based in Memphis, TN. According to his obituary, McAleer's skill as a centerfielder was first recognized in 1888, when he was playing for a club in Milwaukee, WI. In addition to his playing in the majors, he umpired one National League game in 1893.

McAleer broke into the major leagues in Cleveland, OH, where he established a reputation as a graceful outfielder. In 1898, when the Spiders' owners purchased the St. Louis Browns franchise, McAleer opted to stay in Cleveland, taking a three-year hiatus from baseball until the Cleveland Blues franchise joined the newly-formed American League. He participated in only three games with the Blues, in 1901, before taking over as manager of the new league's St. Louis Browns (a different team than the National League club). 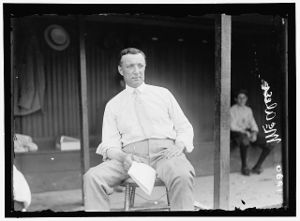 McAleer lured players such as future Hall of Famers Jesse Burkett and Bobby Wallace and managed the Browns for eight years. He later served as manager of the Washington Senators, and was a major stockholder in the Boston Red Sox between 1912 and 1913. During his tenure as Washington's manager, he reportedly invited President William Howard Taft to throw the first-ever Presidential opening pitch (opening day, 1910, Senators v A's).

Following a bitter quarrel with Ban Johnson, president of the American League, however, McAleer sold his holdings in the Red Sox. McAleer's feud with Johnson turned out to be a lifelong affair, despite the efforts of legendary baseball manager Charlie Comiskey to smooth over the rift. He returned to his native Youngstown, where he died at the age 66.

An article in The Youngstown Daily Vindicator praised the ex-major leaguer in the following terms: "Forceful and resourceful, but always retiring when there was talk of his share in the development of baseball, James R. McAleer died within a matter of weeks after the passing of Byron Bancroft Johnson, his chief partner in the forming of the American League, and the man with whom he 'broke,' which break brought about his retirement."

Despite McAleer's varied career, his contributions to professional baseball have never been fully recognized. In 1936, in the first elections to the Hall of Fame, he received just one vote in the balloting for 19th-century figures.