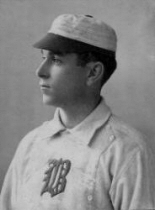 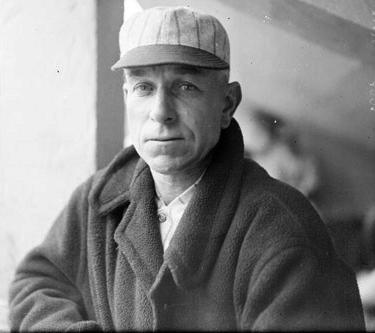 "His fielding, batting and base-running are of the highest order, and make him one of the greatest players in the profession." - Sporting Life, October 7, 1893

Hall of Famer Hugh Duffy has the highest full-season major league batting average of all time, hitting .440 in 1894. He had a 17-year major league career and also managed for 8 years. He won the 1894 Triple Crown, played on the top Boston Beaneaters teams of the 1890s, and had a lifetime batting average of .324. His teammates in the Beaneaters outfield included Hall of Famers Billy Hamilton and Tommy McCarthy.

Duffy was a Boston Red Sox coach in the late 1930s when Ted Williams came up. He worked with Williams on his hitting. When Williams was batting over .400 in 1941, a reporter asked him if he was going to break Duffy's all-time record for highest batting average, and Williams said he hoped not because he liked Duffy a lot.

Duffy originally came to the majors at age 21 with Cap Anson's 1888 Chicago White Stockings. George Van Haltren was one year older and the two of them tried to get playing time in the outfield. Both became regular outfielders in 1889 along with Jimmy Ryan. In 1890, Duffy and Ryan both played for Chicago's entry in the Players League. Duffy then moved in 1891 to the pennant-winning Boston Reds in the American Association, where he was a teammate of Dan Brouthers. He came to the Beaneaters in 1892, who won the pennant and repeated in 1893, 1897 and 1898.

Duffy turned the amazing feat of a career .300+ average in 4 different major leagues - the National League, the American Association, the Players League and the American League.

In 1901, he played for and managed the Milwaukee Brewers, in the American League's inaugural season as a major league. He later served stints as skipper of Harvard University (1918-1919), Boston College (1928-1930, a few years after the other Heavenly Twin had done so), the Philadelphia Phillies, Chicago White Sox, and Boston Red Sox and was also on the Red Sox coaching staff in 1931 and 1939. He also scouted for the Red Sox.

He was not particularly successful as a manager, finishing no higher than 4th in the league in 8 years of managing. He had more success managing in the minor leagues.