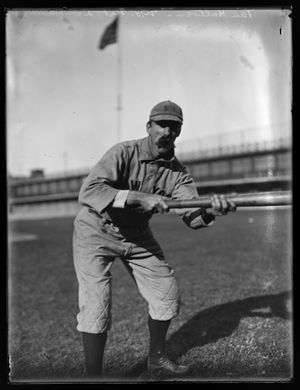 George Van Haltren is one of the greatest of the non-Hall of Famers, with 2532 lifetime major league hits and 1639 runs scored. He and Jimmy Ryan are the only players with 1600 runs scored who are not in the Hall of Fame (other than Pete Rose, who is a special case).

In addition to his hitting, Van Haltren also pitched, with a major league record of 40-31. He was in the top ten in Adjusted ERA in 1887. He also managed very briefly in the majors in 1892.

He was primarily a center fielder, appearing in 1827 games at the position. He was a prodigious base stealer, ranking # 20 on the all-time list. He also ranks in the top 100 of all time for singles, triples, batting average, runs scored, hits, and times on base.

When he was managed in 1901 by George Davis, and in 1903 by John McGraw, he was much older than either of them.

Van Haltren moved to California as a child and got his start in professional baseball pitching for Oakland. Here is a photo of Van Haltren with the Oakland team in 1886. Prior to that he had played for a sort of semi-pro team that played a couple times a week.

A broken ankle led to the end of his major league career.

After his major league days, he played and managed in the Pacific Coast League (mostly with Oakland) through 1909. He also was head coach of the University of California in 1900. After retiring, Van Haltren umpired in the PCL in 1909, scouted for the Pittsburgh Pirates in 1910-1911, and umped in the Northwestern League in 1912.

Based on similarity scores, the most similar position player is Hall of Famer Fred Clarke, and eight of the ten most similar players are in the Hall of Fame. One of the exceptions is Kenny Lofton, who is still eligible and thus may get in. The other is Jimmy Ryan, who also has over 1600 runs scored and thus might eventually be let in by the Veterans Committee.

In terms of pitching, one of the most similar players is Johnny Broaca, the New York Yankees pitcher from the days of Lou Gehrig who had some good seasons. Van Haltren's record was 40-31 with a 4.05 ERA while Broaca's was 40-29 with a 4.08 ERA.