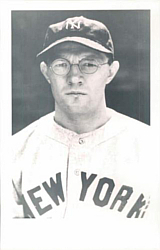 “He was a little bit strange, a little weird at times, hard to figure. He sort of kept to himself." - Bob Feller

Johnny Broaca was a major league star who left baseball suddenly and abruptly at the height of his career. His lifetime major league record was 44-29 with 42 complete games in 121 appearances.

Broaca came out of Lawrence High School and later the prep school Phillips Academy in Andover, MA. He was also a Yale man. In college, he was a boxing champ and ran the 600 yard race. He spent 1933 in the high minors at Newark, going 7-2 (Charlie Devens, out of bitter Yale rival Harvard, was a teammate who went 10-6 and later was with Broaca on the Yankees).

In Johnny's rookie year with the 1934 New York Yankees, he went 12-9 as a starter. It was Babe Ruth's last year with the team. In 1935 he went 15-7, and, with the pennant-winning 1936 Yankees, he was 12-7. Lefty Gomez, a year older, went 13-7. In 1937 he started 1-4. He jumped the Yankees during the season and sat out the rest of the year as well as all of 1938. According to his SABR biography, it appears his troubles may have involved a bitter marriage and divorce. It had been announced a week before his abrupt departure that he had an arm injury. He came back in 1939 with the Cleveland Indians, going 4-2 primarily as a reliever. All of Broaca's major league teams finished well over .500, and two of them won the pennant.

During his baseball absence, rumors abounded he was to train to become a professional boxer. Eventually, he went back to his hometown of Lawrence, MA, to work as a laborer. Another source says that Broaca left baseball because his wife divorced him and he worked for Tyer Rubber at low wages because he refused to let his wife get any alimony. remembrance. Yet other sources have different information. The New York Times had an article saying that the team voted a World Series share to Broaca's estranged wife (the first time a share was ever voted to a woman) after Broaca left the team. article. The book Joe McCarthy: Architect of the Yankee Dynasty says that Broaca abandoned his wife. Broaca ultimately spent the last half of his life as a recluse, dying of a heart attack in May 1985.

The December 1957 Baseball Digest relates a story where Gomez, unhappy that Broaca was saving his arm and refused to throw balls before a game, played a practical joke on Broaca by calling the bullpen, pretending to be the manager, and ordering Broaca to warm up for nine innings straight. The story goes that Joe McCarthy did not know for many years why Broaca claimed to be unable to start the next day's game. The New Bill James Historical Baseball Abstract tells another story about Gomez getting upset at Broaca for calling him "Goofy". When asked why Gomez was upset when other players such as Pat Malone also called him "Goofy", Gomez said "Malone didn't go to Yale".