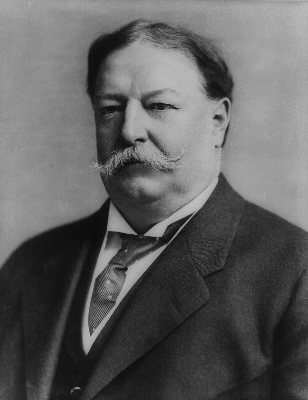 William Howard Taft served as the 27th United States President from 1909 to 1913 and was the first president to throw out the first ball at a Major League Baseball season opener. On April 14, 1910, Taft threw out the ball before the Washington Senators beat the Philadelphia Athletics. Walter Johnson, who caught Taft's throw, pitched a one-hitter for the home team. This was different from the current first pitch ceremony. Taft threw the ball from the stands to the pitcher on the mound, rather than throwing from the mound to the catcher. Later that year, on May 4th, during a visit to St. Louis, MO, he attended home games of both the St. Louis Cardinals at Robison Field and the Browns at Sportsman's Park on the same afternoon. He only caught a couple of innings of the first game, a sloppily-played affair, but stayed to the end of the second, a 14-inning thriller that ended in a 3-3 tie.

Taft is the only man to serve as both president of the United States and Chief Justice of the Supreme Court and is also one of two Presidents to be buried in Arlington National Cemetery. He is also well known as the heaviest President, weighing in at over 300 pounds. He was Chief Justice of the Supreme Court when Judge Oliver Wendell Holmes issued his famous antitrust ruling.

One biography says Taft as a child played second base and was a power hitter. The Young Taft. Various sources say that he was a third baseman on the Yale University baseball team when he was a student there in the 1870s, but that story is likely incorrect. He was however an avid golfer who played the sport well into his later years.

Taft's half brother Charles Taft owned the Chicago Cubs for a brief time.