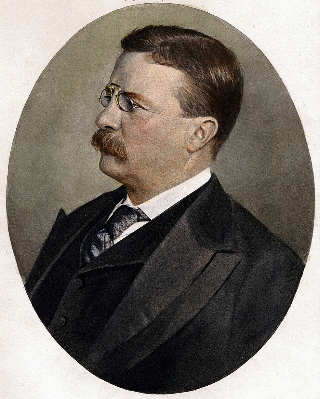 "Father and all of us regarded baseball as a mollycoddle game. Tennis, football, lacrosse, boxing, polo, yes. They are violent, which appealed to us. But baseball? Father wouldn't watch it, not even at Harvard." - Alice Roosevelt

Theodore Roosevelt was the 26th President of the United States, moving from Vice President to President upon the assassination of William McKinley.

Roosevelt was a fan of more dangerous sports than baseball, but came to enjoy the game when his sons took it up.

Roosevelt apparently never attended a major league game, but was given a lifetime pass by major league baseball.

It was reported that Teddy Roosevelt, Jr. was a back-up on the Harvard team.

"I like to see Quentin (Roosevelt) practicing baseball. It gives me hope that one of my boys will not take after his father in this respect, and will prove able to play the national game." - Theodore Roosevelt