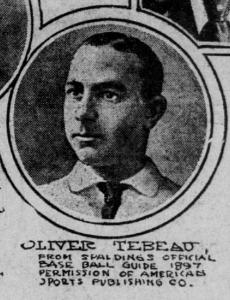 "Tebeau and McGraw enjoyed almost interchangeable reputations as revolutionary cutthroats of baseball, the Robespierre and Danton of baseball. Innovators of the new rowdy game . . ." - from the book Field of Screams: the Dark Underside of America's National Pastime

Brother of George Tebeau but probably not Pussy Tebeau and cousin of minor leaguer Al Tebeau, Patsy Tebeau played thirteen years in the major leagues and managed twelve. As player-manager, he took his pennant-winning 1892 Cleveland Spiders to post-season play.

He started out in the majors as a third baseman, but became a first baseman in mid-career and eventually played more games at first than at third. He also played some second and shortstop toward the end of his major league career.

Tebeau was playing in the minors as early as 1885. He was born and died in St. Louis, MO, and while most of his major league career was spent with Cleveland, he finished up with St. Louis.

The book Field of Screams says Tebeau was a childhood friend of Bill Joyce in St. Louis. He began in the minors in 1885 and was playing major league ball in 1887 when an injury wiped out the rest of his season. He was a top fielder and an aggressive baserunner, but an ordinary hitter. The book chronicles any number of blood-and-gore type stories, including one in which, in post-season play, McGraw slammed a ball into Tebeau's face, splitting his lip. Tebeau ran a successful saloon in the financial district after his baseball days, but, saddened when his wife left him, committed suicide in 1918.