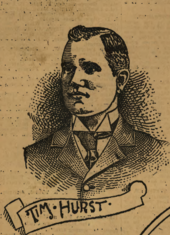 "The pay is good, and you can't beat the hours - three to five". Tim Hurst on umpiring

Hurst was an avid runner as a youth, and then gravitated towards refereeing and umpiring in various sports. He started umpiring in the Pennsylvania State League in 1888, moved to the Southern League in 1889 and finished that season in the Western Association after the Southern League disbanded in mid-year. In 1890, he managed the Minneapolis Millers in the Western Association for a year. In 1895, he was briefly kicked out of the National League, because some owners apparently objected to his refereeing boxing matches on the side (boxing had a quite tawdry reputation at the time), so he worked in the Eastern League that year.

On August 4, 1897, Hurst was arrested and fined $100 and costs in Cincinnati, OH on a charge of assault and battery when he picked up a beer bottle thrown from the stands in a game between the Reds and Pittsburgh Pirates and hit a fireman over the right eye. In 1900, a number of owners asked that he be banned from their cities because of his fiery temper and ungentlemanly language. He only umpired one game in 1904 and was out of action until hired by the American League in mid-season in 1905. He umpired in the junior circuit until 1909, when he was fired by AL President Ban Johnson on August 12th following a heated argument with Eddie Collins of the Philadelphia Athletics in a game on August 3rd. According to his obituary "Hurst insulted Collins so flagrantly that Ban Johnson fired him and wouldn't hear of a reconsideration of his case." What happened was that he called Collins out when trying to advance from first to second on a fly out, even though Chicago White Sox second baseman Jake Atz had clearly dropped the ball; when the mild-mannered Collins objected, Hurst insulted him and spit a wad of chewing tobacco at him. It seemed that Hurst's motivation at making the call, which came late in the second game of a doubleheader, was that he wanted to catch a train home from Philadelphia to his home in New York City, and thus made a deliberately bad call to shorten the game. He had umpired over 1,500 major league games by that point, one of the highest totals of that time. He had a reputation for being always fair and in control of the situation, never being intimidated by a large crowd or the vast sums of money that were sometimes riding on his decisions.

Hall of Fame umpire Bill Klem later called him "the toughest umpire of them all"; "he was so tough that if a ballplayer did not like one of his decisions and challenged him on the field, Tim would say 'OK, we'll stop the game and go right under the stands and settle it now.'" He went on to add that one day, a batter stepped out of the box to show disagreement with one of Hurst's calls; the umpire replied that if he did it one more time, he would spit in his eye. The batter did it again one pitch later, and Hurst kept his promise. He was involved in a number of fights with players, including one with Kid Elberfeld earlier in 1909 that had already tried Ban Johnson's patience with his outbursts.

Hurst died of acute indigestion while attending a relative's funeral in 1915. He had been in poor health earlier, to the point that the New York Times ran a story in 1912 stating that he was ill from pneumonia and was not expected to recover. However, he was well enough to travel from Long Island, NY, where he resided, to Pennsylvania, where he passed away.