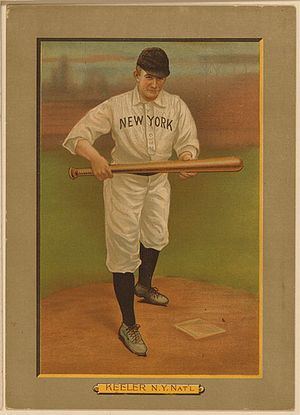 Willie Keeler played 19 years in the major leagues, split between the 19th and 20th Centuries. His .341 batting average is one of the highest of all time. His best year was 1897, with the famous Baltimore Orioles, when he hit .424 to lead the league and was a teammate of John McGraw, Hughie Jennings, and Wilbert Robinson. He hit .350 or better for seven consecutive seasons from 1894 to 1900; only Ty Cobb has more.

He had played in the Eastern League before coming to the majors, and went into real estate afterwards.

Minor leaguer Gus Moran stated in Sporting Life in 1904 that he was responsible for Keeler getting into pro ball. John Rainey broke his leg in 1892 while playing for Binghamton, and as a possible replacement Moran suggested the manager have someone take a look at young Keeler, playing ball at the time for the amateur Acmes of New York. Keeler was signed and hit .373 at age 20 for Binghamton; second best on the team was Quiet Joe Knight, a 32-year-old veteran who had hit .312 in the majors in 1890 and hit .358 for Binghamton in 1892.

Keeler umpired one National League game in 1910. He coached for the Brooklyn Tip-Tops in 1914 and scouted for the Boston Braves in 1915.

Quotations by and about Willie Keeler[edit]

". . . he had a trick of hitting a high hopper to an infielder. The ball would bounce so high that he was across the bag before he could be stopped." - Honus Wagner

"I was just thinking of those suckers, the club owners, paying me for playing ball. Why, I would pay my way into their ballparks if that was the only way I had to get into a game." - Willie Keeler

"Speaking of sun-fields (fields where outfielders face into the sun), such as the one at Cub Park, it is the belief of Addie Joss that such fields ruin the batsmen who have to play in them, and that this has killed off the hitting of Keeler and other stars." - Sporting Life, Jan. 16, 1909