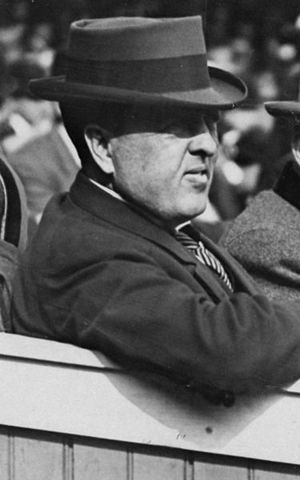 Frank Farrell and Bill Devery were the first owners of the New York Highlanders - later to become the Yankees. They purchased the Baltimore Orioles on January 3, 1903 for $18,000. They were allowed to purchase the team and move it to New York, NY because of their ties with the local politics. All previous attempts to move a team to Manhattan had been blocked by the Giants.

Farrell was the son of Irish immigrants of limited means. He had little formal schooling, being employed as a clerk in a dry goods store by his early teenage years. He then became a bartender in a saloon near the headquarters of Tammany Hall, the political machine that dominated New York City at the time, becoming friends with a number of persons employed by the organization. Those contacts allowed him to eventually open his own saloon in a rough part of town. That's where he became friends with Devery, who was commander of the local police station, although defending widows and orphans was not necessarily his first priority. The pair used their contacts to open a number of other establishments, whose specialty was offering a space for gamblers. The businesses made them quite prosperous.They were also active in the protection racket and in bookmaking for horse races. Indeed, thoroughbred racing and not baseball was the true sporting passion of his life, and he soon operated his own racing stable.

His activities became notorious during the 1901 municipal elections when Judge William Travers Jerome, who was running for the position of Manhattan District Attorney on an anti-corruption platform, publicly denounced him as "the head of the gambling combine in this city." Farrell was of course backing Jerome's opponent, Henry V. Unger. The New York Times took Jerome's side in the quarrel, printing a scathing editorial that read in part: "FRANK FARRELL is a gambler, the chief gambler of New York City, we suppose. The business to which he owes his bad eminence, and in which he gains his living is carried out in violation of the law. His gambling places have enjoyed the protection of the law (because) he is an intimate, personal friend of MR. W.S. DEVERY, the Deputy Police Commissioner of New York." The anti-gambling campaign was successful, as Tammany hall was swept out of office.

Farrell did not necessarily fit the profile that American League president Ban Johnson was looking for in prospective owners, but he had little choice, as the Baltimore franchise was bankrupt, and the league needed to field an eighth team to start the 1903 season, which was fast approaching. To make the transfer of ownership more palatable, Farrell and Devery named a local businessman, Joseph Gordon as a figurehead president, but control remained in their hands. Gordon did deliver one important asset to the team, as he identified a piece of property in the Washington Heights neighborhood of Manhattan, which became the site of Hilltop Park. It was Gordon who led the press conference which unveiled the new team on March 12th, and the two main financial backers were not even identified as principals when the team was incorporated a short time later. With the new ballpark built at warp speed using his funds, Farrell had a front row seat when the Highlanders opened their season. Meanwhile, District Attorney Jerome was continuing his campaign against gambling, and in 1904 Farrell had to divest himself of his casino, the crown jewel of his gambling empire, as well as some of his pool rooms. In 1907, he replaced the figurehead Gordon as team president.

However, 1907 was also when his sporting fortunes began to turn, with disappointing results by his stable on the race track, and the Highlanders sinking into also-ran status after challenging for the American League pennant in their second season. In 1908, the state of New York passed legislation that outlawed off-track betting, putting another serious dent in his finances. In 1909, Gordon sued him for half ownership of the Highlanders; he was not successful, but testimony laid bare the sham around the founding of the club. In 1910, the team began to use the Polo Grounds, where the rival Giants played, as their home field for some Sunday doubleheaders, as their own ballpark proved to be increasingly unsuitable for major league baseball. However, Freedman's attempts to identify a new site proved unsuccessful. In 1911, it was the Highlanders' turn to return the favor, as the Giants used Hilltop Park as a temporary home after fire had destroyed the Polo Grounds. In 1912, the team became officially known as the Yankees, a nickname used unofficially before that, but also sank to last in the AL standings. Attendance plummeted, and with the ten-year lease on Hilltop Park having expired, the Yankees moved full-time into the rebuilt Polo Grounds. Farrell had by then identified a site in the Bronx to build a new ballpark, but had run into delays. In 1914, with the Yankees hovering near the cellar, manager Frank Chance got into a fistfight with the two owners and was fired.

After the 1914 season, the duo of Farrell and Devery sold the team to Colonel Jacob Ruppert and Captain Tillinghast L'Hommedieu Huston. By then, the original owners were in dire financial straits, most of their other businesses having been forced to close, and their political protection around City Hall a thing of the past. The two had even begun to quarrel with each other. They sold the club in January of 1915 for $460,000, splitting the amount equally, with Ban Johnson acting as broker. Ruppert and Huston would be the ones who set the franchise on its glorious course.

After selling his baseball team, Farrell had a much lower profile. He continued to be involved in horse racing, but on a much smaller scale than in his glory days. He was stricken with bronchitis while holidaying in Atlantic City, NJ in 1926, and died of a heart attack at the Ritz-Carlton Hotel a few days later. He was believed to still be a millionaire, but proceedings around his estate showed that he was in fact barely solvent.