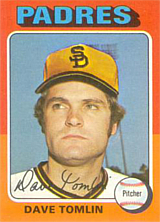 Dave Tomlin was born on June 22, 1949 in Maysville, Kentucky. The youngest of 12 children, Dave was the only child of Thurman and Minnie Tomlin to be born in a hospital! Although born in Maysville, he was raised in Bentonville, OH, a speck of a town sitting between Manchester and West Union, Ohio. He attended West Union (OH) High School in Ohio.

In the 1967 amateur draft, he was selected in the 27th round by the Cincinnati Reds. Tomlin was assigned to the Wytheville Reds, in the Appalachian League. He led the team in wins (7), starts (13), complete games (6) and shutouts (2). His ERA was 4.34, better than the team's 4.96. He played the next two seasons with the Tampa Tarpons in the Florida State League, almost exclusively as a reliever. He pitched in 37 and 23 games in 1968 and 1969 respectively. His ERA was below 3.00 each season and in 100 combined innings, he allowed only 81 hits. In 1970, he was part of the starting rotation with the Asheville Tourists in the Southern League. His record was deceiving at 6-10, as his ERA was 3.11 in 25 games (22 starts). He had a very good season in 1971 with the Indianapolis Indians in the American Association. He made 41 appearances, all in relief, with a WHIP at 1.148, second on the team among pitchers with at least 50 innings. His record was 7-4 with 4 saves and a 2.21 ERA.

Tomlin was back with Indianapolis in 1972 when he was a swingman, making 8 starts in 36 games. His ERA was 2.80 in 90 innings. In September, he made his major league debut with the Reds. He made 3 appearances, allowing 4 runs in 4 innings. He began a third season with Indianapolis in 1973 but was called up twice by the Reds, first in June, then in early August for good. In 25 games with Indianapolis, his ERA was 3.48. He was on the Reds' roster in the postseason and made one appearance as the Reds lost the NLCS to the New York Mets. After the season, he was traded to the San Diego Padres, with Bobby Tolan, for pitcher Clay Kirby.

Tomlin started the 1974 season with the Hawaii Islanders in the Pacific Coast League. He was the team closer and was excellent during his time in Triple A that season. He was called up in May by the Padres but after three scoreless outings, he allowed at least one run in 7 of his next 8 games. He was sent back to Hawaii in July and returned to the Padres in September. For the season with Hawaii, his record was 5-1 with 7 saves in 25 games with a 1.88 ERA. With the Padres, a strong September lowered his ERA at 4.34 for the season. In the offseason, he was used as a starting pitcher in the Puerto Rican League and had some success under manager Pat Corrales.

He made the big league club out of spring training for the first time in 1975, after allowing only 1 run in 9 innings in exhibition games. He led the team with 67 games and his ERA was 3.25 in 83 innings. He went 4-2 with 1 save. Tomlin was used in mop-up situations in 1976. He was effective in April (he didn't allow a run in 7 appearances) but then his ERA ballooned to over 6.00 a month later. He finished the season strong, allowing only 2 earned runs in his final 17 games, covering 30 innings. Overall his ERA was 2.84 in 49 games, losing his only decision.

The 1977 season was the busiest of Tomlin's career. He finished second in the National League with 76 appearances, tied with teammate Dan Spillner (another teammate, Rollie Fingers, led the league with 78 games pitched). He threw 101 2/3 innings and his ERA was 3.01, allowing 98 hits and only 21 unintentional walks. It was his last season in San Diego. In January, he was traded to the Texas Rangers for Gaylord Perry. But Tomlin never pitched for the Rangers. At the end of spring training, his contract was sold to Cincinnati. That year, in 1978, he established career highs with 9 wins and 4 saves but otherwise struggled with a 5.78 ERA in 57 games (62 1/3 innings).

He had a good season in 1979 as the Reds went on to win the NL West title, but Tomlin was seldom used in critical situations. On a division champion, the team record was 15-38 in games in which he pitched. In August, he was basically idle with only one appearance. His final record was 2-2 with a 2.62 ERA. He pitched in all 3 games of the NLCS as the Reds got swept by the Pittsburgh Pirates. 1980 was his last season as a regular on a major league roster. He was used sporadically and his performances were subpar. On August 9th, he had played 27 games with a 5.54 ERA in 26 innings, allowing 38 hits and 11 walks. He did not pitch another game the rest of the month and was released in early September.

Dave signed before spring training 1981 with the Toronto Blue Jays organization. He pitched the whole season with the Syracuse Chiefs in the International League, going 2-3 with 5 saves in 38 games with a 3.63 ERA. The following year, 1982, he was released by the Jays days before the big league season began. He made 64 appearances for Indianapolis, going 9-2 with a 3.53 ERA in 91 2/3 innings. In September, his contract was sold to the Montreal Expos who called him up, but he pitched in only one game. Tomlin began the 1983 season with the Wichita Aeros in the American Association. He led the team in ERA (3.41) and WHIP (1.185) in 52 1/3 innings, allowing only 44 hits and 15 unintentional walks in a very hitter-friendly environment. The Expos wanted him on their roster in August but lost him to the Pittsburgh Pirates instead, as he had to clear waivers before being added to Montreal's roster and was claimed by the Bucs. He pitched in only 5 games the rest of the season for Pittsburgh and re-signed with the Pirates in January. He played the next two seasons with Hawaii, in the Pacific Coast League, with ERAs below 3.00 each season. He was called up for one game with the Pirates in August of 1985.

He was back in the Expos organization in 1986 after signing a minor league contract. He was very effective with a 2.72 ERA in 72 2/3 innings in relief. He had one last call to the bigs in late July. He struggled in his first two games and was up for only 7 games before returning to Indianapolis in August. After the season, he launched his coaching career when he was named the pitching coach with Indianapolis. He still pitched when the team was short of pitchers, going 3-2 with 1 save in 25 games with a 4.45 ERA. In 1988, Tomlin was assigned to coach with the West Palm Beach Expos, in the Florida State League. He remained in the same capacity in 1989. He remained in the organization in 1990 as a roving coach. In 1991, he became the pitching coach with the GCL Expos, a position he held until 1993. In 1994, he was promoted to the Harrisburg Senators as a pitching coach. It was his last season in the Expos organization. After the season, he joined the Atlanta Braves and became the minor league pitching coordinator from 1995 to 1997 when he was released.

Tomlin joined the Boston Red Sox organization in 1998, and had the following assignments: