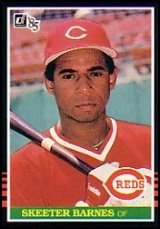 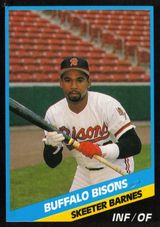 Skeeter Barnes was born in Cincinnati, OH, attended the University of Cincinnati, and was selected by the Cincinnati Reds in the 16th round of the 1978 amateur draft, but he only played 52 games for the Reds in 1983, 1984 and 1989. In fact, it took Barnes until 1991, when he was already 34 years old, to receive a chance to play for more than a cup of coffee in the major leagues. When he finally got his belated break, he did not waste it, putting up three solid seasons as a bench player for the Detroit Tigers until age finally caught up with him.

It was not for lack of success that Skeeter lingered in the minor leagues all those years. Just about everywhere he played, he hit well. The problem was that he did not really have a defensive position, even though he could play passably at first base, third base, all three outfield spots, and even second base, and he was always a bit of a free swinger, never drawing enough walks to go along with his ability to hit line drives. But there was never any doubt that he could hit: in his first season with Billings of the Pioneer League in 1978, he hit .368 with a league-leading 22 doubles and 76 runs batted in. He was outshined that year by teammate Gary Redus who hit a minor league record .462. Barnes followed with averages of .293 at Waterbury of the Double A Eastern League in 1980 and .306 with the same team in 1982, then .337 with the Indianapolis Indians of the Triple A American Association in 1983, the second-highest batting average in the league. On top of that, he always was a steady run producer, with some power and good speed, stealing as many as 32 bases in 1982.

Barnes earned his first call up with the Reds in September 1983, but only hit .206 in 15 games. He returned to Triple A in 1984, where his .328 average for the Wichita Aeros was third-best in the American Association and earned another ticket to Cincinnati in July. Used mostly as a pinch hitter, he hit .119 in 32 games to return to Triple A in 1985. He was traded to the Montreal Expos for outfielder Max Venable after only 12 games, and returned to Indianapolis, which was now the Expos' top farm team. He spent a little over a month in the majors that summer, but only managed 26 at bats, mainly as a pinch hitter, with a .154 average before being sent back down. After returning to Indianapolis at the beginning of 1986, he was again traded in midseason, this time to the Philadelphia Phillies. Even though he hit .369 for the Portland Beavers after the trade, he did not get a call up, and began to move from organization to organization, getting brief but unsuccessful looks with the St. Louis Cardinals in 1987 and the Reds again two years later. 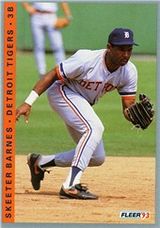 At the beginning of the 1991 season, Barnes was 34 years old and all he had to show for his 13 seasons in professional baseball was a .156 average in 75 games in the National League. But since he could always crush minor league pitching, he always managed to find a regular job for one Triple A team or another. In 1991, it was the Toledo Mud Hens of the International League, the Detroit Tigers' top farm club. He was unstoppable during the first half of that season, hitting .330 with 9 home runs and 40 runs batted in 62 games, before the Tigers called him up to the American League. At long last, he did not waste his opportunity. He hit .289 in 159 at bats the rest of the year, with 20 extra base hits and 10 stolen bases. That performance allowed him to keep his spot on the Tigers' bench in 1992, when he posted very similar numbers. It was also the first time Barnes spent a full year in the majors. He kept his job in 1993, with almost identical results. While he was in no danger of earning a regular job, he was a solid contributor off the bench all three seasons, providing the Tigers with a dependable right-handed bat, a bit of speed, and the ability to play multiple positions. He played another season with the Tigers in 1994, and was still hitting .286, although in only 21 at bats, when he was sent down to the minors at the end of June. He retired at the end of the season, putting an end to a remarkable career.

Immediately after retiring, Barnes moved into coaching in the Detroit Tigers organization. He later spent two years with the Milwaukee Brewers and many years with the Tampa Bay Rays player development systems.

Barnes was scheduled to coach the Hot Rods in 2020 before COVID-19 forced the cancellation of the minor league season.