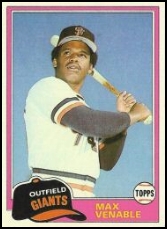 Max Venable played twelve seasons in the big leagues, mostly as an outfielder and pinch-hitter. He also stole bases well, with 64 steals in his career as opposed to only 18 times caught stealing. He currently is a coach in the San Diego Padres organization.

Max was a third-round pick in the 1976 amateur draft by the Los Angeles Dodgers and worked his way up their minor league organization until December 1978 when he was drafted away by the San Francisco Giants in the 1978 Rule V Draft. He went straight to the majors from Class A in 1979, but played sparingly. For years he split his time between the Giants major league team and their minor league Phoenix Giants club. He would have benefited from spending a full season in AAA in those years, but the Giants would always call him back to the majors, because he was a useful bench player as he could field all three outfield positions, ran well and was a good pinch-hitter. But given a chance to develop, he might well have turned into a quality regular; the lack of playing time when he was developing thwarted his growth as a player. He had his most major league at-bats in a season in 1983 with the Giants.

He was sent to the Montreal Expos as part of the trade for Al Oliver and played for them for part of 1984, and then a year later was traded to the Cincinnati Reds, where he spent three seasons. In 1984 and 1985 he also spent time in AAA ball.

The book Stand and Deliver indicates that through 1987 he had already had 57 major league pinch-hits.

He finished out his major league career from 1991 to 1991 with the California Angels, where each year his batting and slugging averages were higher than his career norm. Venable also played in Japan for Lotte.

He was a star running back in high school, leading his team to three undefeated seasons. His son, Will Venable, broke into the majors in 2008.