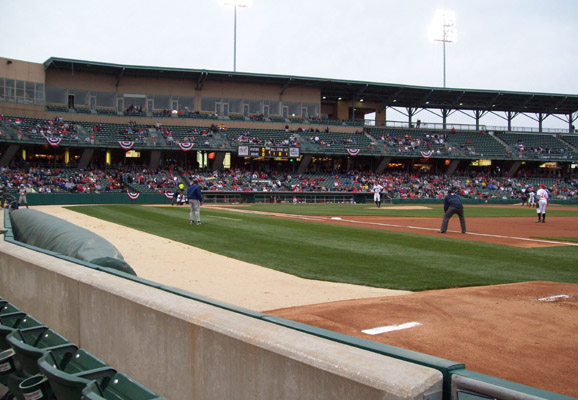 Victory Field in Indianapolis, IN, is the home of the Indianapolis Indians, the Pittsburgh Pirates' Triple-A International League farm team. It served as a recreational area for basketball players in the 2021 NCAA Basketball Tournament, which was played in a "bubble" because of the Coronavirus pandemic.

The HOK Sport (now Populous) brick ballpark replaced Bush Stadium in 1996. The old yard, originally Perry Field, was renamed Victory Field during World War II. In 1941, former local ballplayer and Major Leaguer Owen J. "Donie" Bush bought the club and ran it for a decade. The ballpark was renamed for him in 1966, but folks kept calling it Victory Field so the old name was recast on the new ballpark. Perry/Victory hosted 13 million fans over its 65 years, but "The Vic" matched that in just over 20.