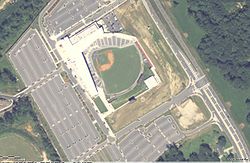 Coolray Field in Lawrenceville, GA, is the home of the Gwinnett Stripers, the Atlanta Braves' Triple-A International League farm team, and the Braves' 2020 and 2021 Coronavirus pandemic alternate training site.

Pinch-hosting for Atlanta's Truist Park, it drew 10,229 fans to the 2020 University of Georgia-Georgia Institute of Technology game. Its top crowd, 10,568, welcomed long-time Braves skipper Bobby Cox managing a team of Braves' farmhands in an exhibition against the 2012 big-league club.

Suburban Atlanta's most populous county, Gwinnett County, knowing the Braves were unhappy with the Virginia facility where their Triple-A Richmond Braves played, opened then-Gwinnett Stadium in the Braves' protected territory in 2009. It was completed very rapidly for a Triple-A stadium - less than one year, between the June 3, 2008, groundbreaking and the April 17, 2009, first home game of the then-Gwinnett Braves. Coolray Heating and Air bought naming rights in 2010.

While the stadium has a Lawrenceville street address, the ballpark is not within its city limits and actually lies closer to those of Buford, GA.