Durham Bulls Athletic Park in Durham, NC, is the home of the Durham Bulls, the Tampa Bay Rays' International League farm team. Opened in 1995, "The DBAP" (pronounced DEE-BAP) jumped to Triple-A when Durham landed an IL franchise created in the 1998 expansion.

That bumped the Carolina League team of Bull Durham (1988) fame from Durham, first to Danville, VA, and on to Myrtle Beach, SC, when that city finished a new ballpark.

That outcome was not mere happenstance. In 1980, Navy veteran and former Savannah Braves General Manager Miles Wolff acquired a Carolina League expansion franchise for less than $2,500. Within five years, in a city that had lost a Carolina league team 10 years before, his Durham Bulls were drawing 200,000 fans a year - unheard of for that level at that time. Along the way, his investors included a Hollywood producer and the two discussed making a movie at Durham Athletic Park - then still the home of the Bulls. That would eventually happen, and Bull Durham drove the team into the stratosphere - the first Class A club ever to draw 300,000 in a year. Wolff wasn't stopping there. After the film wrapped but four months before its release, he pitched the city of Durham on building a bigger, state-of-the-art park expressly to bring Triple-A to town. One opportunity passed with the 1993 National League exansion, but then Durham got on board. The DBAP opened April 6, 1995, and landed Tampa's Triple-A expansion team three seasons later.

HOK Sport (now Populous) designed the DBAP. The otherwise modern ballpark goes for a bit of quaint with a manual scoreboard, one of eight in the minors. Its 32-foot-tall left-field wall, the Blue Monster, is only 305 feet from home plate. It has a "hit-this-bull-win-steak" sign like the one in the movie, except in left field instead of right and is real rather than a screenwriter's idea. In real life, neither the DBAP nor the DAP before it had such a sign.

MLB's 2021 Minor League Reorganization greatly expanded existing standards for stadiums hosting affiliated teams. The city of Durham approved $10 million in 2022 for the necessary upgrades, which are expected to be finished by the 2023 season.

The new Bulls tried staging annual throwback games at the DAP - now a working baseball field and museum - but stopped after two. 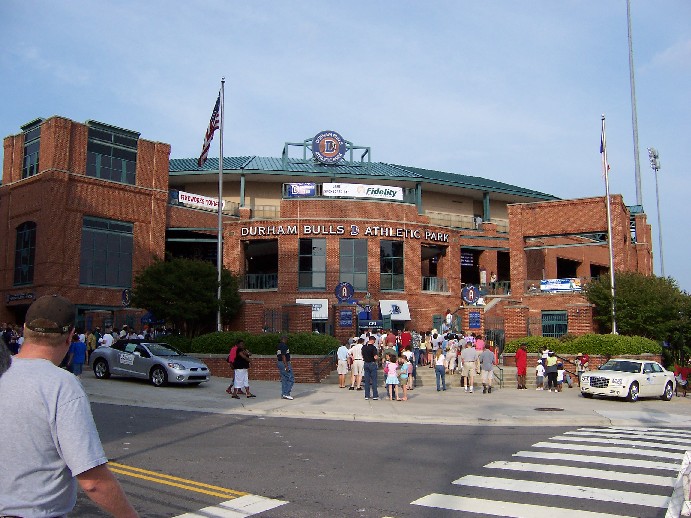