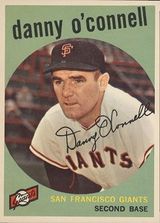 17-year-old infielder Danny O'Connell was signed as an amateur free agent by the Brooklyn Dodgers before the 1946 season. He was with the Bloomingdale Troopers of the North Atlantic League that year, where he hit .327 with 4 homers while holding down the hot corner for 121 games. He would go on to have four more good years (1947-1950) in the minors. On October 1, 1949 the Dodgers traded him to the Pittsburgh Pirates for $50,000 and Jack Cassini.

O'Connell first was called up to the Pirates on July 11, 1950 after hitting .351 with the Indianapolis Indians in 84 games. He finished out the year in Pittsburgh with a solid .292 average in 79 games. Danny then spent the next two years (1951-1952) with the United States Army during the Korean War. He was back with the Pirates in 1953, hitting .294 with 8 homers and fostered a 23-game hitting streak in 149 contests.

Danny was then traded to the Milwaukee Braves. After a respectable first year with the Braves in 1954, when he hit .279, he tailed off considerably at the plate the next two years, falling to .225 and .239 while playing regularly. He was dealt to the New York Giants as part of the deal for Red Schoendienst midway through the 1957 season. As a result, he missed a chance at playing in the postseason, as Milwaukee reached the World Series that year and the next. On June 13, 1956, Danny was the last Braves' player to hit three triples in one game until matched by Rafael Furcal of the Atlanta Braves during the 2002 season.

Danny was the San Francisco Giants' opening day second baseman in 1958, their first year on the West Coast. Five days later, he hit two of his season's total of three homers, off Don Drysdale of the Los Angeles Dodgers.

In 1959 and at age 30, Danny had begun to slow down, hitting only .190 in 34 games. After being released on April 12, 1960 by San Francisco, he spent the 1960 season with the Tacoma Giants of the Pacific Coast League and hit .312 in 143 games. He then signed as a free agent with the expansion Washington Senators and spent the next two seasons (1961-1962) in their infield. His next turn was as player-manager of the York White Roses of the Eastern League for the first month of the 1963 season. He coached for Washington for the other part of the 1963 season then was a coach for the Senators in 1964 as well.

O'Connell had spent ten active seasons in pro baseball (1950-1963). He had a major league career batting average of .260 with 39 homers and had fielded every position in the infield, at a .975 composite clip. He always had a good eye at the plate, however, drawing 431 walks lifetime (more than strikeouts) including seasons of 76 and 77 in 1956 and 1961, respectively. His minor league stats show him hitting at a .314 average with 43 homers and fielding at a .967 percentage.

After baseball, Danny returned home to New Jersey, where he was a plumbing supplies salesman and a high school basketball official. He died on October 2, 1969 at age 40 in Clifton, NJ, after suffering a coronary occlusion during a car crash while driving his automobile.