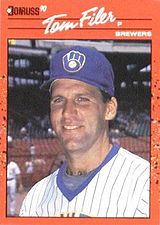 Tom Filer went 7-0 in his career with the Toronto Blue Jays. This may not sound much, but no other pitcher in history has permanently left a team after more than 6 wins, and no losses.

In 2005, Aaron Small was 10-0 for the New York Yankees to threaten this record, but Small then lost his first decision for the Yankees in 2006.