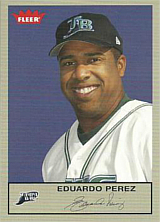 Eduardo Pérez is the son of Hall of Famer Tony Pérez and brother of minor leaguer Victor Pérez.

He has worked for ESPN as one of the analysts for Baseball Tonight and as a color commentator on weeknight broadcasts. He managed the Puerto Rican national team in the 2010 Central American and Caribbean Games. Despite the home field advantage and the second-highest number of former major leaguers in the event, they only finished fourth; they were undefeated in round one but lost both medal round games in the 9th inning. He also managed the Colombian national team in the 2013 World Baseball Classic Qualifiers.

On June 8, 2011, he was appointed hitting coach of the Florida Marlins, replacing the fired John Mallee. He then moved to the Houston Astros in 2013 as bench coach for new manager Bo Porter but stayed only one season. He managed league champions in different winter leagues in consecutive seasons: the Puerto Rican League's Cangrejeros de Santurce in 2014-2015 and the Venezuelan League's Tigres de Aragua in 2015-2016.