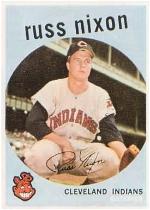 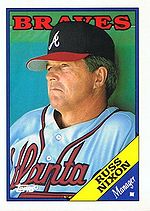 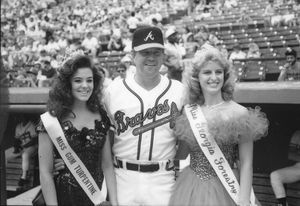 Nixon in 1988 with beauty pageant winners.

Catcher Russ Nixon won the 1954 Florida State League batting title. Then, the following year, he captured the Three-I League hitting crown while playing for the Keokuk Kernels. After his playing career ended, he spent several seasons as a manager and coach.

His twin brother, Roy Nixon, never reached the majors. They were both signed on the same day by the Cleveland Indians and were teammates on the 1953 Green Bay Bluejays and both had 46 hits - but Russ did it in 137 AB while it took Roy 182 at-bats to reach that figure.

He was a manager in the Cincinnati Reds organization from 1970 to 1975, then was a coach for the major league team from 1976 to 1982. He became the team's manager partway through the 1982 season replacing John McNamara. After the 1983 season, he essentially swapped places with Vern Rapp, Rapp taking over as the Reds' manager, and Nixon moving to the Montreal Expos coaching staff for 1984 and 1985. Nixon was an Atlanta Braves coach in 1986 and 1987 and was managing the Braves' AA affiliate in Greenville, SC in 1988 when he was chosen to replace Chuck Tanner as skipper. He stayed there for roughly two years without finding any success until he was fired on June 22, 1990. However, the Braves became consistent winners as soon as general manager Bobby Cox stepped down from the front office into the manager's job in 1991. Nixon moved to the Minnesota Twins organization in 1991 and managed the Portland Beavers. Nixon coached the Seattle Mariners in 1992 and then spent five years in the San Diego Padres organization in varying roles. Nixon managed the Las Vegas Stars in 1993-1994. He led the Padres player development program as Director of Minor League Instruction (1995) and Director of Player Development (1996). He spent his final year with the Padres as a Special Assignment Scout. In 1998 Nixon returned to the Reds as manager of the Billings Mustangs for three season (1998-2000) though he spent the first part 1998 as an Indianapolis Indians coach. He spent the 2001-2002 seasons at the major league catching instructor for the Pittsburgh Pirates. Nixon concluded his long coaching career as a manager in the Houston Astros organization.