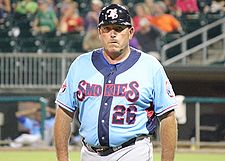 Bailey spent 9 years managing in the Braves organization (1983-1990) and 14 years coaching & managing (1991-2004) in the Boston Red Sox chain. In addition to managing, Bailey filled a variety of roles for the Red Sox.

Bailey reached the major leagues in 2000. Initially he was promoted to coach first base, but later switched positions with bench coach Tommy Harper. He returned to managing the Pawtucket Red Sox in 2002 where he stayed until he was dismissed after the 2004 season. Bailey was out of organized baseball in 2005.

The Chicago Cubs hired Bailey in 2006 as the their minor league catching & baserunning coordinator before he took the helm of the Daytona Cubs in mid-June. He has managed in the Cubs organization to the present day.

In addition, Bailey has managed one of the best dynasties in Venezuelan Winter League history, piloting the Tigres de Aragua to 6 titles from 2002/2003 through 2012/2013. Bailey led the franchise to its first Caribbean Series title in 2009. After missing out on the title for two years, Bailey again guided his squad to their sixth championship in 2012, with a team that had to overcome the kidnapping of C Wilson Ramos, and the tragic death of P Rosman Garcia in a car crash. The Tigres fired Bailey in November, 2013 when he started the season with a 12-14 record. Bailey continued to manage and coach in Venezuela for a number of years after his dismissal.

The second dismissal from the Tigres happened during the playoffs and Bailey was replaced by his bench coach Carlos Garcia.