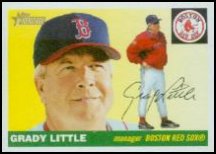 Grady Little spent two decades as a coach and minor league manager, but he is best known as the skipper of 2002 and 2003 Boston Red Sox, famous for leaving Pedro Martinez in 1 or 2 innings too long in the 7th game of the 2003 ALCS against the New York Yankees. He was ultimately fired after that season.

Prior to his coaching/managing career, he was drafted by the Atlanta Braves as a catcher and spent several seasons in the minors. He was a player/coach for the West Haven Yankees in 1973, and a coach in 1974. After his playing career ended, he spent five years away from baseball as a cotton farmer in Texas.

His younger brother, Bryan Little, played and coached for several seasons in the majors.

Little was an adviser to the producers of the baseball movie, "Bull Durham".