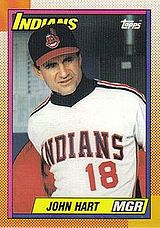 John Hart played for three seasons in the Montreal Expos organization, where he was a catcher. He played his first season with the West Palm Beach Expos in 1969 under his birth name of John Reen. He returned to West Palm Beach in 1970, becoming known as John Hart and played one more year for the Quebec Carnavals of the AA Eastern League in 1971. All three seasons, he was the starting catcher for his team, hitting between .220 and .231 with almost no power (he hit only 20 extra base hits, 2 of them homers, in 758 minor league at-bats). By 1972, the Expos were flush with promising young catchers, including Gary Carter, Barry Foote, Bobbie Goodman and Terry Humphrey, making Hart redundant. He was released, and turned to scouting and coaching to earn a living. He was coach at William R. Boone High School in 1981-1982 and was a manager in the Baltimore Orioles organization from 1982 to 1987, including two full seasons in AAA.

Hart was an Orioles coach in 1988 and took over as skipper of the Cleveland Indians late in the 1989 season. After less than 20 games at the helm, he moved on to the club's front office, serving as their general manager from 1991 to 2001. This was one of the most successful decades in team history, with Jacobs Field being packed and the team reaching the World Series twice, in 1995 and 1997. One of the pillars of his approach was to sign the team's young stars to multi-year deals, a rare approach at the time when such deals were reserved for players who had hit the free agent market. Thus Sandy Alomar, Carlos Baerga, Albert Belle, Omar Vizquel, Jim Thome and Manny Ramirez were locked up for a number of years while they were still affordable, giving the team a strong core around which to build. The strategy was considered bizarre because those players would not have been eligible for free agency immediately, but the strategy gave the team certainty and avoided potentially acrimonious salary arbitration hearings. The approach soon became standard for smaller market teams.

In 2001, he became GM of the Texas Rangers. He stepped down on October 4th, 2005 and was replaced by Jon Daniels. In 2013, Hart was still employed by the Rangers as a Senior Advisor to Baseball Operations. In 2014, he moved to the Atlanta Braves organization as senior adviser to team President John Schuerholz. Taking a page from Hart's days as Cleveland's GM, the Braves immediately began to sign up their key young players to long-term contracts, with 1B Freddie Freeman, P Craig Kimbrel and Julio Teheran and SS Andrelton Simmons all signing multi-year deals within a few days of each other in early 2014. However, the Braves failed to make the postseason that year and when GM Frank Wren was fired on September 22nd, Hart was asked to succeed him on an interim basis. On October 23rd, he was named team President in charge of baseball operations while keeping the General Manager responsibilities. A little less than a year later, and at the end of a very difficult 2015 season by the Braves, he appointed his right-hand man, Assistant GM John Coppolella, as the team's new GM while retaining his duties as team President. At the end of the 2017 season, however, Coppolella had to resign abruptly because of allegations of violating Major League Baseball's international signing rules. Hart replaced him on an interim basis until the hiring of Alex Anthopoulos as GM and Vice-President in charge of Baseball Operations on November 13th. Hart was also tainted by the scandal, and was moved to a non-executive position in the President's office. However, within a couple of days, he decided to tender his resignation rather than occupy a position devoid of real power.

His son-in-law Guy DeMutis has been a scout.